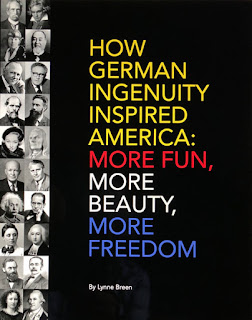 You may remember when I wrote about, I'll See You Again, Lady Liberty by Ernst Floeter and Lynne Breen.  Lynne Breen has written another book that many of my readers may be interested in, How German Ingenuity Inspired America: More Fun, More Beauty, More Freedom.

Lynne recently emailed me to announce her new book. Here is what she has to say about it.

"Ernst inspired me to write another book—this one about the many contributions Germans and German-Americans have made to our country. The book has just been published by the German-American Heritage Foundation in Washington, D.C., which expects the books to arrive from the printer by the end of December. The title is How German Ingenuity Inspired America: More Fun, More Beauty, More Freedom.
The neat thing about the book is that it provides interesting reading not just for those who have a German heritage, but for anyone who is curious about the roots of many of our traditions, including food, drink, transportation, toys, education, scientific and medical advances, art and architecture, and just about everything else that makes our culture unique. Michigan is cited often in the book— from the railroad station in Niles and the Fisher Building and Book Cadillac Hotel in Detroit, to the Bavarian Inn in Frankenmuth and Henry Ford’s Model-T Ford and Tri-Motor airplane, among other topics.
The book also contains "fun facts." Some examples are: two German -American brothers developed Cracker Jack; Barbie doll was patterned after a doll in Germany; and Orville and Wilbur Wright were inspired by a German hang glider.
The Foundation ordered only 2,000 copies of the book in this first printing. Once it raises funds from the sale of these copies, it will be able to order many more and also have the book listed on Amazon. I would like to emphasize that this is not a money-making venture; a mission of the nonprofit Foundation is to help educate the public about contributions Germans have made, and the book helps to fulfill that goal. Further, any royalties I receive will be quite minimal per the agreement between the Foundation and me.
While the book is too new to have garnered any reviews, four endorsements appear on the back cover: They are from the grandson of former President Harry Truman; a university professor in Germany; and two German-American organizations here in the U.S."
The book is coffee table size, contains some 300 color and b/w photos, is hard cover, and comprises 240 pages. The cost is $39.99 plus $7.00 s/h.
If you would like to order a copy of Lynne's book, call the Foundation at 202/467-5000 to reserve a copy. The office is open Tuesdays through Fridays, although it will be closed during the last two weeks in December.
I will be calling Tuesday morning and plan to write more after I receive it. It would make a great Christmas gift.
Posted by Brenda Leyndyke at 2:39 PM No comments: