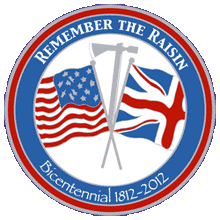 200 years ago today, President James Madison signed a Declaration of War, which became known as the War of 1812.  Michigan was just a territory at the time.  It was sparsely populated.  Native American groups were a big part of the population.  Some of those groups included Ottawa, Chippewa, Potawatomi and Wyandot Native Americans.

There were only five areas of the territory settled at this time:  Detroit, River Raisin, Mackinac, St. Clair River, and Sault Ste. Marie.  All of these areas would be embroiled in the conflict.

Michigan Territory's location and access to the Great Lakes would factor into their involvement in the war.  From June 1812 until July 1815, Michigan was the front line of the war.  At least 7 land and 4 naval battles were fought within the territory.  The British forces occupied all or part of the territory during this time. 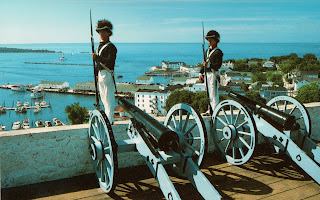 The first major land event happened in Michigan with the capture of Fort Mackinac on July 17, 1812.  Fort Mackinac is on Mackinac Island, on the western end of Lake Huron.  The British planned a surprise attack and captured the fort.  Control of Fort Mackinac stayed in British hands until the end of the war.  Other major battles were held in Detroit, with Detroit changing hands twice during the war and the Battle of Frenchtown and River Raisin Massacre.

The residents of the Michigan territory suffered physical and economic hardships during this time.  Fur trade and agriculture made up the economy at the time.  Fur trading became more difficult during the war.

December of 1814 brought the war to an end with the signing of The Treaty of Ghent.  This treaty defined Michigan boundaries with Canada.  British controlled places were returned to Michigan leading to a westward expansion.  Large scale migration occurred for the next 30 years.  Michigan became a state in 1837.

Today, we reflect and remember the role that the War of 1812 played in Michigan history and development.
Posted by Brenda Leyndyke at 5:28 PM