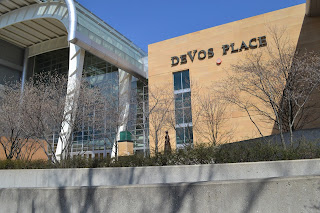 Who wouldn't have fun during four days of great genealogy learning?  I know I did. I am home from the NGS 2018 Family History Conference that was held in Grand Rapids, MI last week.  Grand Rapids was a great venue for the conference. 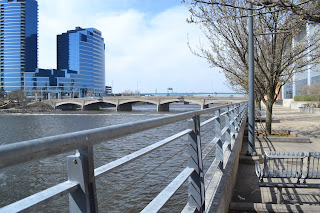 The DeVos Place overlooked the Grand River and allowed conference goers to understand how Grand Rapids received its name.

I attended seventeen of nineteen sessions. I spent one session visiting the exhibit hall and talking to vendors, and one session I was so exhausted that I skipped it.  Other activities included volunteering at registration and as a room monitor. I covered the Michigan Genealogical Council vendor table three times and even had a book signing at the National Genealogical Society's booth.  I represented Calhoun County Genealogical Society at Society Night, went to a Dutch Meet and Greet and dinner, and even fit a trip in to visit my in-laws.  It was tiring, but also very motivating.  I can't remember the last time I was this excited about genealogy.  I thought I would have time to blog each night about my sessions, but that didn't happen.

Wednesday started with a great opening session with John Philip Colletta on Coming Along the Towpath, The Erie Canal and the Peopling of the Great Lakes States.  Colletta is one speaker that if you have never heard him, you must.  He infuses humor and props along with a wealth of knowledge.  Colletta talked about working on, along and for the Erie Canal and using the canal for migration, transporting cargo, and traveling for business or leisure. 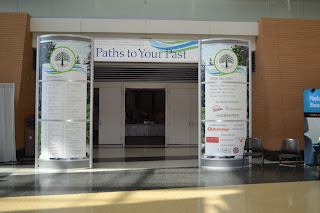 The Exhibit Hall opened after the opening session and throngs filled the hall.  I had one book that I wanted to get at the New England Historic Genealogical Society's booth and it was sold out before I got there.  I walked through the hall to get an idea of what was available and made plans to come back during one session time when the crowds were less.

Finding Treasures in the Hoosier Courthouse with Michael D. Lacopo was my first afternoon session.  Dr. Lacopo is an excellent speaker and knew I wanted to go to at least one of his sessions.  This one will help me with my Hoosier ancestors.  He covered history, court structure, record keepers, and more.  Excellent resources were included as well.

It was hard for me to pick one topic for the last session of the day.  I decided to pick the one from the BCG Skillbuilding Track, Analyze This! Scrutinizing Evidence for Problem Solving with Vic Dunn. It was to "learn the methodology astute genealogists use to break-down brick walls", and I do have a few brick-walls!  I didn't take one note which is odd for me.  It ended up being a good review for me of methods I already use.  I just need to use them. 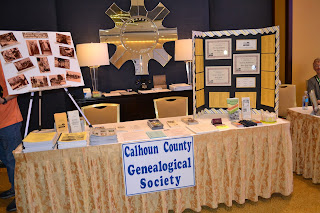 The night ended with Society Night.  Members of local genealogical and historical societies were set up at the Amway Grand Plaza Hotel Center Concourse and my local society had a table, which I helped man.  Many people came by our table and it was fun to talk to and share information about my county, Calhoun.  I took a few minutes and walked around the concourse to see who else was there.  Many of the societies I was familiar with, but one caught my attention because I had never heard of their organization.  It was the Greater Grand Rapids Women's History Council.  The council is "dedicated to educating the community and celebrating the legacies of local women, preserving knowledge of their past, and inspiring visions for the future." During WWI over 4 million women were registered.  23,000 were registered in Grand Rapids.

This is just a recap of the first day and I have three more days of fun to tell you about.

Posted by Brenda Leyndyke at 5:21 PM

Email ThisBlogThis!Share to TwitterShare to FacebookShare to Pinterest
Labels: NGS2018GEN