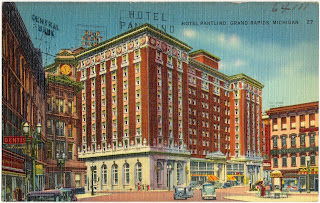 One of the hotels for the upcoming National Genealogical Society "Paths to Your Past" family history conference is the Amway Grand Plaza hotel.  It has a rich Grand Rapids history.  You may hear people referring to it as the Pantlind hotel, which it was known as for years.

You enter the lobby and immediately see the architectural charm. The Pantlind was created by the same designers as the New York City Grand Central Station and Biltmore Hotel.  It was named "one of the ten finest hotels in America" in 1925.

The Amway Corporation purchased it in 1981.  Amway restored the Pantlind to its original opulence and added the luxurious Glass Tower.  If you are lucky to get a room with a view, you will overlook the Grand River.

Many architectural details should not be missed.  Three Czechoslovakian chandeliers grace the lobby, made of Austrian crystals and weighing 4000 pounds each.  The domed gold leaf ceiling is a sight to see.  Arched windows, brass molding, wired electric gaslight torches complete the ambiance of the place.

If you want to know more about the historical details of the hotel, check the tour brochure available at the hotel's website. The Amway Grand Plaza is part of the Historic Hotels of America, a program of National Trust for Architecture History Preservation.

Email ThisBlogThis!Share to TwitterShare to FacebookShare to Pinterest
Labels: NGS2018GEN