I have stories of some of those changes, and events, that molded his life because my dad left his family a great gift-his autobiography. In honor of his life I will share my favorite stories he wrote. 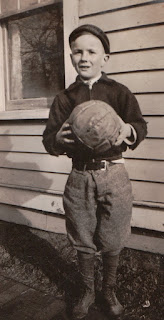 He entered Kindergarten in the fall of 1930 and only remembered that when the rest of the Kindergarteners were playing tag, or in the sandbox, he went to watch the older kids play softball. He would chase their foul balls and hoped they would ask him to play, which they never did. My dad had a love of sports which started at the age of five!

Another grade school memory was he collected baseball cards. He always lamented that his mother threw them out when he went to college. He would regularly read the sports page of the newspaper and knew every starting player's name in the National and American baseball leagues. There were eight teams per league at the time. My dad would attend the men's softball games in Hazel Park, Michigan and they got to know my dad. One of the players would say, "see that little kid over there? I bet you can't stump him on a starting player for any major league team." My dad wrote, "he might want to know who was the starting centerfielder for the Philadelphia Phillies and without blinking an eyelash I would spit out Richie Ashburn." My dad was in third and fourth grade at the time.

Another story I remember my dad telling me when I was a kid was about a car ride he took with his dad, " I remember going to the store, one Saturday morning, with my Dad in his old Reo back in the days when cars had running boards to help you climb up into them.  As my Dad and I were puttering down John R Street on the way home one Saturday morning from shopping, I leaned against the door and next thing I remember I was laying on the pavement by the side of the road.  How I’ll never know, but hardly suffered a scratch.  Worst for wear, however, was Dad who I think went a block before he realized he was missing a passenger, namely me. When he came back he was understandably shaken, but thankful I was ok."  I can just see it in my mind, now I can chuckle but I imagine it scared him at the time. I never met my grandfather, but wouldn't that be a great story to hear from his side of things.

His junior high summers were pretty carefree, my dad talks about hanging out with friends and biking to Palmer Park which was about 6-7 miles from home. They would have their mom's pack a lunch and they would head to the tennis courts at the park, sign up for a court, play for an hour or so, go to the concession stand and buy a pop and eat lunch. After lunch, they would sign up for a court and play another hour or so.  If he wasn't playing tennis, he and a buddy would go to a vacant lot two lots north of their house on Reynolds Ave, in Hazel Park and golf. My dad had a seven iron and a couple of golf balls. He and his friend would dig a couple of holes, about 20-25 yards apart, and play for hours. He would always try to better his score.

My dad served during World War II in the European Theater at the Battle of the Bulge. When the war ended in Europe he was sent back to the United States. He often said the most beautiful sight he ever witnessed in his life was when the ship entered New York harbor and he saw the Statue of Liberty for the first time. 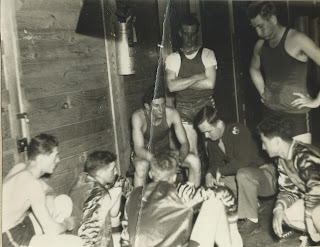 He ended up at Fort McClellan, Alabama as a physical training and bayonet instructor. During the evening he coached and played on a company basketball team. A regimental tournament was organized and my dad was asked by Colonel Reeder to coach the 7th Regiment team. There were seven regiments in the tournament. His team hit the jackpot when a bus from New York arrived with five boys asking if they could join his team. My dad said once they took one trip up and down the court he knew he had his starting five. My dad always wondered what happened to the boys from that team.  He only remembered two: Jack Gilcrest and  ? Pommerano. The 7th Regiment won the tournament with a win over the 3rd regiment and my dad believed this was the catalyst for what would become a fifty year coaching career.

My dad shared many wonderful stories in his autobiography, but these were the ones I enjoyed reading. My dad loved sports, all kind of sports. Well, maybe not fishing, but all the others. It didn't matter what sport was on television, my dad would watch it. My mom would joke that he would watch a flea match if it was on television!

I think back over the years that my dad grew up in and all the events that molded him into the man and father he was. I miss my dad but I have his autobiography to keep his memories close. I hope my dad is enjoying his birthday in heaven and that there are golf courses, and flea matches, there.