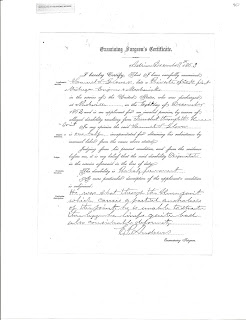 Source:  Glover Jr., Samuel Stillman; Pension File No. 28715, Civil War Pension File, (Washington, D.C.: U.S. National Archives and Records Administration), p70 .
Clicking on the above document will give you a better picture of Samuel Stillman Glover Jr.'s Examining Surgeon's Certificate dated December 17th. 1863.  Samuel was discharged on 8th Day of December, 1862, so this would have been written one year after discharge.  I think it gives a good description of the effect his gun shot wound had on him one year later.
Samuel's civil war pension file has given me a wealth of information.  There are many surgeon's reports within his file.  I found this one to be most interesting because it is the first one after he returned home from The Civil War.  I can only imagine the pain and discomfort this gunshot wound must have caused my 2x great grandfather for the remaining forty years of his life.
Transcription:
Examining Surgeon's Certificate
Adrian December 17th 1863
I hereby Certify, That I have carefully examined
Samuel S. Glover, late a Private of Co. H. first
Michigan Engineer & Mechanicks
in the service of the United States, who was discharged
at Nashville on the Eight day of December
1862, and is an applicant for an invalid pension, by some reason of
alleged disability resulting from Gunshot through the knee
-joint   In my opinion the said Samuel S. Glover
is one half incapacitated for obtaining his subsistence by
manual labor from the cause above stated.
Judging from his present condition, and from the evidence
before me, it is my belief that the said disability Originated
in the service aforesaid in the line of duty.
The disability is Probaly Permanent
A more particular description of the applicant's condition
is subjoined:
He was shot throught the knee joint
which causes a partial ancholosis
of the joint.  he is unable to straiten
the leg he limps quite bad
also considrable deformity
E.P. Andrews, Examining Surgeon
﻿
Posted by Brenda Leyndyke at 8:00 AM