The Proposal: A Day In Our Life 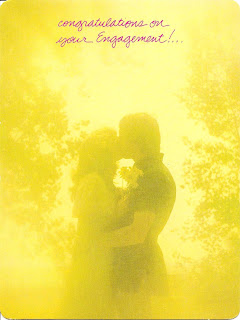 The cover of an engagement card congratulating us on our engagement
sent to us by my sister and matron of honor, Linda.  The card cost $.60!﻿
My husband and I are celebrating our 31st anniversary today.  It is always fun to reminisce about the important events in our married life.  Today, I am reminiscing about the proposal.

Kirk asked me to marry him on Saturday, September 13, 1980.  We had been out to dinner that night and went back to his apartment on Lake Huron in Richmondville, Michigan.  We were listening to the music of Linda Ronstadt and The Muppet Movie, which were our favorites.

Kirk said something to the effect of what would you think about getting married?  I asked, "Are you proposing to me?"  He said, "Yes" and I said, "Yes".  I was thrilled.  I was thankful he didn't make a public display of proposing as I am shy about that type of thing.

My engagement ring diamond belonged to his grandmother, Leona Corcoran, and needed to be reset.  Kirk had it reset into a beautiful white gold solitaire setting.  I received the ring on Friday, October 10, 1980.

As they say the rest is history!  We were married in March of 1981.  Would I marry him all over again?  You bet ya!  Happy Anniversary, Honey.
Posted by Brenda Leyndyke at 8:00 AM