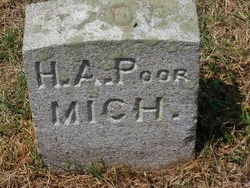 Harlan A. Poor, the son of Samuel B. Poor and Eleanor Begole Poor, died 12 May 1864 during the Battle of Spotslyvania, Spotslyvania County, Virginia.  Harlan A. Poor is my second great grand uncle.  He was a private in the 17th Infantry for Michigan.