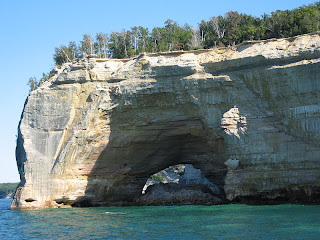 
"If you seek a pleasant peninsula, look about you" is the Michigan state motto and I imagine my ancestors who immigrated from foreign lands coming to Michigan and seeing the beauty that I see when I look at my home state.  Clear blue lakes and rivers, rock structures and mountains, sandy beaches and dunes are what Michigan had to offer the first immigrants.

Before 1837, when Michigan became a state, Native Americans were the very first inhabitants.  Next, came the French, who were the earliest missionaries in the area. Then, the British arrived as a result of the expansion of the British Empire. Eventually, others realized what great opportunities Michigan offered.

Three rivers were important to the early settlement of Michigan.  The Clinton River Valley saw the settlement at Mt. Clemens, Pontiac, and Rochester.  Ann Arbor and Ypsilanti were formed along the Huron River.  Monroe, Tecumseh, and Adrian were settled along the Raisin River.  All three of these areas form a circle around Detroit.

The early Michigan pioneers migrated from New York and the New England area, settling in the Michigan Territory from 1830-1837.  Michigan became attractive to the early settlers because traveling to the territory became easier.  Originally, the only mode of transportation was by horseback or wagon train, which was a long and treacherous trip.  Steamship travel on Lake Erie became available, too.  The completion of the Erie Canal, in 1825, made migrating easier for New Englanders. Road construction from Ohio to Detroit and Chicago allowed settlers to arrive that way. Plus, land offices were opened in Monroe and Detroit.  These factors helped draw settlers to the territory.  140,000 pioneers came to the Michigan Territory from 1830-1837.  New York, Ohio, Vermont, Pennsylvania, and Massachusetts were the top five states early settlers migrated from.

Fertile land, forests, and mines were all available for early immigrants to develop.  Agriculture was the main economy.  Michigan's early history was rich in industrial development, much as it is today. Iron mining helped the manufacturing of stoves, steam engines and farm implements.  The Soo Locks and Railroads helped to grow Michigan's economy.  Copper mining was a draw as well as the lumber industry.  Later, automobile, chemical, and cereal manufacturing made Michigan a place to migrate to.

Foreign immigrants came from many countries to make Michigan a true melting pot. Michigan was made the state it is today from the many immigrants who traveled from their homeland during the years 1837-1924.

I will discuss the push (reasons for leaving their homeland) and the pull (reasons to immigrate to Michigan) factors by country.  The below countries are where the greatest number of immigrants came to Michigan. 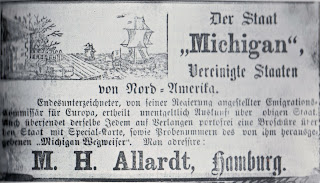 Advertisement for M. H. Allardt, Michigan Commissioner of Emigration who was sent to Germany and set up an office in Hamburg.  Allardt published an eight-page magazine promoting Michigan to the Germans.

Note:  The first German immigrants came to Washtenaw County, in 1830, setting up missions.  Two early missions were in Ann Arbor, 1833, and Frankenmuth, 1845. These missionaries wrote back to Germany and encouraged others to immigrate. 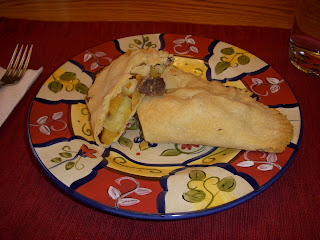 The Cornish brought pasties (pass-tees) to the Upper Peninsula of Michigan.
They were eaten by the miners and heated with a Cornish stove-
a candle under a shovel.

3.  England/Cornish
Push
Pull
4.  Ireland
Push
Pull
The Irish in Michigan worked in mining and construction of railroads and canals.  They helped build the canal in Grand Rapids in 1835.  Some Irish were known as pack-peddlers.  Merchants from Northern Ireland traveled rural areas selling fine table and bed linens.

Mexican immigration occurred around the same time.  Many Hispanic Americans worked in the farm industry.  Some were migrant workers and left for warmer climates in the winter months after all harvesting was done.

Michigan was hit hard during the manufacturing and economic crisis of a few years ago.  For awhile Michigan was losing population.  The past year or so, it has been more balanced, but not growing at this time.  Michigan is still reliant on manufacturing, but strides have been made in recent years to diversify the economy.  Recent efforts to diversify have led to jobs in the retail, government, medical and bio-tech sectors.

There were some common bonds among the immigrants no matter what country they emigrated from. Many immigrants wrote home encouraging others to join them in Michigan.  They came to Michigan looking for what we would now call the American Dream.  They wanted a job, a home and something better for their children.

Posted by Brenda Leyndyke at 4:45 PM