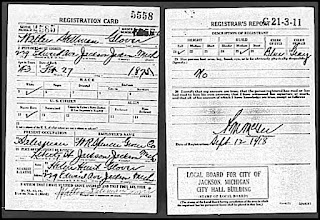 World War I draft registration cards are one of the sources I enjoy looking at.  The card doesn't look like it would contain much information, but it does.

The card for Walter Stillman Glover provided his address, birth date, occupation, place and address of employment. nearest relative, her address, his signature and a description of Walter's looks.

Walter lists his nearest relative as Helen Hunt Glover, who was his wife.  Walter and Helen Hunt were married 25 October 1897 in Jackson, Jackson, Michigan. The information for Helen included her maiden name which was a nice find, which allowed me to find additional information about their wedding.

Posted by Brenda Leyndyke at 8:01 AM