Using the Sears Catalog for Genealogy 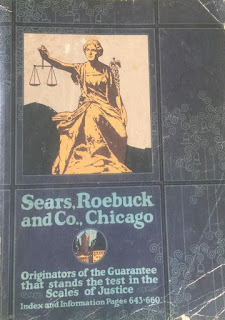 I never would have thought to use the Sears Catalog for genealogy, but I heard Jen Baldwin talk about doing research and she covered a part on the Masons Fraternal Organization. She mentioned she had looked up Mason jewelry in the Sears Catalog and I thought that was a wonderful idea.

My grandfather, Harry Glover, petitioned University Lodge No. 482, listing his occupation as engineer.  He was made a master mason on June 6, 1921. I don't know if he ever had Mason jewelry, but I thought it would be cool to see what it would have looked like when he was a Mason. University Lodge No. 482 held their meetings at the Detroit Masonic Temple. It is a beautiful building still standing in Detroit, MI. 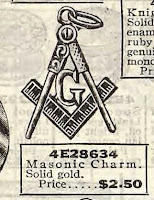 I used the Sears Catalog at Ancestry.com. I found Mason jewelry. I have used a lot of different resources in my genealogy research but this is the first time I used a department store catalog.

Posted by Brenda Leyndyke at 7:56 AM