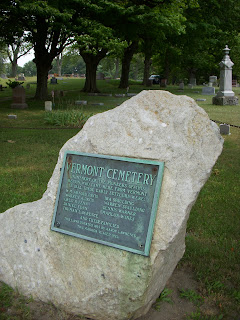 My third great grandfather, Daniel Fenn, was one of the early settlers of Washtenaw County, Michigan.  Daniel Fenn and his family arrived in the Michigan Territory in 1833, settling in the Sylvan Township area.  Washtenaw County, Michigan was established in 1827.  This area at the time was considered a wilderness with the eastern part of the county being sparsely developed.  It is now home to Ann Arbor and surrounding areas.

The year before, Daniel's son, Orlo H. Fenn came with a group of pioneers from Addison County, Vermont and established what was known as the Vermont Settlement.  These men are memorialized on a granite stone in Vermont Cemetery, Sylvan Township, Michigan.

More information can be found in Chapman's History of Washtenaw County, pages 754-758 on Vermont Settlement.
Posted by Brenda Leyndyke at 7:00 AM