I have found a lot of information in Samuel S. Glover Jr.'s Civil War Pension File, but the information I treasure the most is the pages that his wife, Adda L. Dyer Glover submitted herself.

The only information I had on Adda L. Dyer, prior to ordering the pension file, was found in her marriage record. I had her maiden surname and date of marriage. Samuel's pension file filled in a few blanks for me.  The letter below is one that Adda L. Glover wrote asking for an increase in her widow's pension.  She gives her date of birth, place of birth and residence in 1916.  This is the only proof I have of Adda's birth, so far.  All great information that led me to other resources on Adda L. Dyer.

The letter and transcription are below.  (Please click on the letter to get a better view.)  Sadie W. Glover signed for her mother.  Sadie was born Sarah in 1871, she would have been 45 at the time of this letter.﻿ 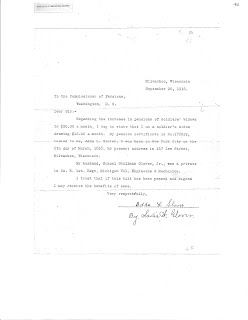 To the Commissioner of Pensions,
Washington, D.C.

Dear Sir:-
Regarding the increase in pensions of soldiers' widows
to $20.00 a month, I beg to state that I am a soldier's widow
drawing $12.00 a month.  My pension certificate is No. 576010,
issued to me, Adda L. Glover.  I was born in New York City on the
6th day of March, 1838.  My present address is 167 Lee Street,
Milwaukee, Wisconsin.
My husband, Samuel Stillman Glover, Jr., was a private
in Co. H. 1st. Regt. Michigan Vol. Engineers & Mechanics.
I trust that if this bill has been passed and signed
I may receive the benefits of same.
Very respectfully,
Adda L. Glover
By Sadie W. Glover﻿
Posted by Brenda Leyndyke at 2:57 PM