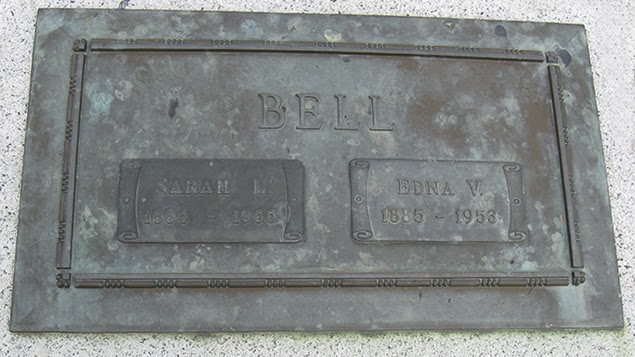 My paternal grandmother, Sarah Lilla Watt, was married twice.  First, to my grandfather, Harry Glover; and second, to Ray Bell.  Ray Bell had been married previously to Edna V., the Edna on the above gravestone.

Ray Bell buried his two wives in the same plot in Queens Park Cemetery, Calgary, Alberta, Canada.  I don't know whose idea this was, but I know that my grandmother had a cemetery plot next to her first husband in Park Cemetery, Marquette, Michigan, which my father thought would be her final resting place.  I would guess that the logistics of transporting her body out of the country was more difficult than the Bell family wanted to deal with.

I have never been to Calgary to visit my grandmother's gravesite, but a wonderful volunteer on Find-a-Grave sent me the pictures.  I have to admit I was a bit shocked when I saw the two wives sharing a tombstone.  I wrote about my feelings here.

I have been thinking a lot about my grandmother lately.  Her birthday was 23 November, this past Saturday.  Happy Birthday and Rest in Peace, Grandma Bell.

Posted by Brenda Leyndyke at 8:12 AM