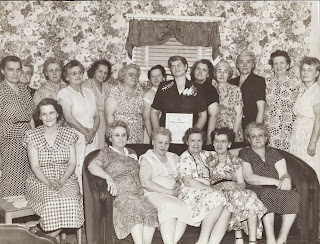 1942-43 Picture of a Chapter of Mom's of America,
Hazel Park ,Michigan

My grandmother, Sarah Lilla Watt Glover Bell, never liked the thought of her son, Bruce, and stepson, Francis "Hank" going off to war.  As a mother of a son, I didn't like it when my son had to sign up for selective service at the age of 18 and he didn't go to war.  I can't imagine how she felt seeing her son report for duty the day after his high school graduation.

The Mom's of America chapter was a source of support for her.  It was a group of mom's, all of whom had son's fighting in World War II.  The picture above was in a photo album at my parent's house.  I don't have a lot of information on it and I can only identify my grandmother.  My grandmother was living in Hazel Park, Michigan at the time.  I don't know if the chapter was a Hazel Park one or an Oakland County one.

I tried cropping and enlarging the certificate in the picture, but I can only make out "Mom's of America" and "Chapter".  I posted the picture on the Hazel Park Historical Commission Facebook page and hope someone can identify others in the picture.

As we celebrate Veteran's Day today, I thought celebrating mom's was important too. Thank you to all those who have served or are serving in the military AND their families for the numerous sacrifices made to protect our freedoms.

20 November 2013 Update:  Facebook Groups are awesome!  I posted the above picture on the Hazel Park Historical Commission Facebook page on November 11th and by the 18th everyone was identified.  Richard Robbins of the Historical Commission found a newspaper article in their archives, which included this picture.  I only had an 8 x 10 copy of the picture.  I never realized it was published in the Hazel Park Palladium newspaper.  This MOMS Group was Chapter 17 and chartered 18 June 1942 and disbanded in 1990.


The Hazel Park MOMS club held its installation on June 18. The State president of the club was the installing officer.

Posted by Brenda Leyndyke at 11:54 AM