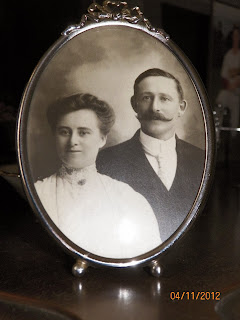 James Burnett Chalmers met Emma Louise Fredrich when he was in the United States apprenticing for plumbing and tinsmiting.  They were married on  6 June 1905 in Toronto, York, Ontario, Canada.

Emma is the daughter of Johann August Fredrich and Louise Zastrow Fredrich. She was born in Manistee, Michigan on 13 July 1876.  James was born in Lethnot, Scotland to John Chalmers and Catherine Burnett.

James and Emma lived their lives in Canada.  First in Owen Sound, then Point Ann, Teeswater, and Durham before settling in Acton, Ontario, Canada.  They were the parents of eight children:  Catherine, Lottie, Robert, Mary, Oral, Margaret, Audrey, and Richard.

I have gotten to know my grandaunt through her granddaughter Mari.  Check back to learn more about James and Emma's family.