Family History is Alive and Well in Michigan

Family History topics aren't associated with History when it is taught in schools, usually.  I wrote about my experience with judging the Michigan History Day exhibits and the wonderful representation of historical exhibits that were entered.

Participants in Michigan History Day could use Family History in their entries, in any division or category.  The Michigan Genealogical Council, which I am a board member of, sponsored three awards, one for each division (Youth, Junior, Senior), for "The Best Entry in the Use of Family History".

Katherine Willson, Vice President of Michigan Genealogical Council, judged documentaries and commented that "There are some budding Ken Burns out there." She presented the Family History Awards to the winners.

Since I was a Special Awards Judge for the Junior Division, I heard about the nominations in Family History at the Junior level.   I am not allowed to tell which students were nominated for the award, but I can share the winners for each division.


I wish I had pictures for all three, but as I didn't know, except for the Junior Division, the winners until the next day, I don't. 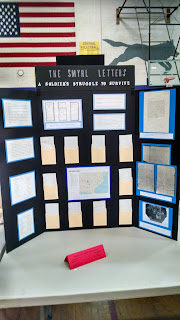 Junior Division Winner for "The Best Entry in Use of Family History".
The Smyrl Letters: A Soldier's Struggle to Survive

The Smyrl Letters: A Soldier's Struggle to Survive was an exhibit that showcased one of the winners, fourth great grandfather's letters.  Her African American ancestor, Thomas Smyrl, was in the civil war on the Confederate side.  He had written the letters to his wife, Mary Jane.  Some of the letters were her reply to him.
The students focused on the part of the letters that had to do with trade, in order for the exhibit to fit this year's theme of "Exploration, Encounter, Exchange in History.  Although, I believe, the letters could have stood alone in the theme with the exchanging of information that has been preserved to give others a look into the life of a Confederate soldier at the time.  Purely, my opinion!  (Note: I was not one of the judges of this exhibit, it was in another group.)

The students used a copy of the original letters for their research.  There were 25 letters in all, the students used 10, those that talked about trade.  The letters were found at the State of Alabama Department of Archives and History.

The students used Fold3.com to find muster rolls and a pension application.  A personal interview was conducted with one of the student's mom, who had conducted research on the family. Other sources included books on the Civil War, the Confederacy, and the regimental history of the soldier.

I was so impressed with the sources that the student's used.  Truly, they are budding genealogists. How awesome would it be to find 25 letters that our ancestor had written?  What a genealogical goldmine!

Congratulations to the winners of the Family History awards!  All students who used family history in their research should be commended.  I think it is awesome the students are starting at such a young age, I wish I had.

Posted by Brenda Leyndyke at 12:31 PM