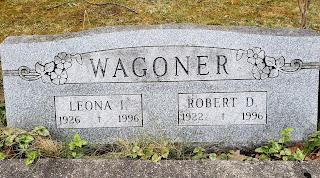 Leona is the daughter of Daisy Ellen Graf and Otto August Fredricks. She is one of 12 children, my mother being one of them. Leona married Raymond Paul Graf in 1947. They had one son, Ronald. She married Robert after Raymond's death. Leona and Raymond lived for years in the Bear Lake area of Michigan.

Aunt Leona was a wonderful, kind person. She had a vibrant personality and distinctive voice. She was a gifted cake decorator and cook. She would bring her ice cream maker to the family reunion and make the best ice cream. I have many happy memories of visiting Aunt Leona. She gave me beautiful crystal goblets for my wedding and I loved them so much I added to the set over the years.

Bob worked on the Great Lakes and he would dock at the power plant in Harbor Beach, MI. Sometimes Aunt Leona would come to Harbor Beach, where we lived at the time, and visit us while he was in town.

My memories of Aunt Leona keep her in my heart. 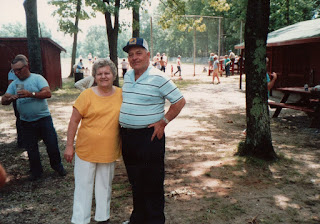 Posted by Brenda Leyndyke at 7:25 AM