The Last Will and Testament of Kasper Graff

Kasper Graff is Johan Caspar Graf, my maternal, second great grandfather, of Miami County, Indiana, United States. He lived from 1827 to 1869.  He was married to Mary (possibly Wrightweasner), but is not listed by name in his will. Caspar and Mary had eight children, all of whom are listed in his will. 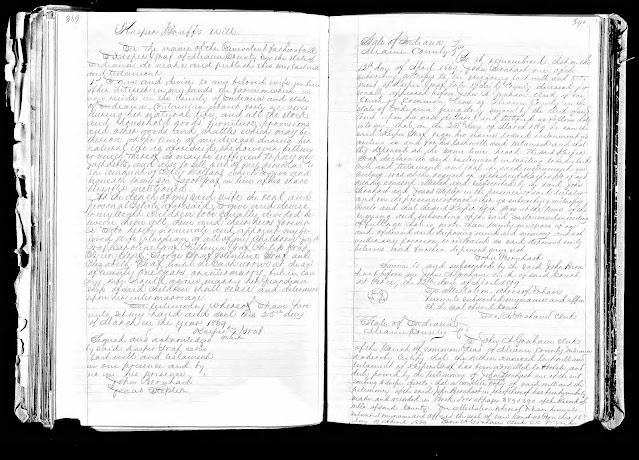 1st I give and devise to my beloved wife in lieu of her interest in my lands the farm on which we now reside in the county of Indiana and state of Indiana. Containing about forty 40 acres during her natural life, all the stock and household goods furniture provisions and other goods and chattles (sic) which may be thereon at the time of my decease during her natural life as aforesaid, she however selling so much thereof as may be sufficient to pay my just debts, and also to sell out of my personal to the amount of Fifty Dollars which I give and bequeath to my son Jacob Graf in lieu of his share hereafter mentioned.

On the death of my said wife the real and personal Estate aforesaid to give and devise to my Eight children to be equally divided between them all, them and their heirs forever I do hereby nominate and appoint my beloved wife Guardian of all of my children, Jacob Graf, Caroline Graf Philbenia Graf Philip Graf Henry Graf George Graf Valentine Graf and Elizabeth Graf until they each arrive at the age of twenty one years or intermarry but in case my wife should again marry her Guardianship of said children shall cease and determine upon her intermarriage

In testimony whereof I have hereunto set my hand and seal this 25th day of March in the year 1869.

By said Kasper Graf as his

Last will and testament

In our presence and by

Us in his presence

Sworn to and subscribed by the John Bernhart before me John A. Graham clerk of said court at Peru, the 12th day of April 1869

John A Graham clerk of the court of common Pleas of Miami county Indiana do hereby certify that the within (annesced) last will and testament of Kasper Graf has been admitted to Probate and duly proved by the testimony of John Bernhart one of the subscribing witnesses there to that a complete copy record of said will and the testimony of the said John Bernhart in proof thereof has been by me duly read and recorded in Book No 1 at pages 389 & 390 of the Record of Wills of said County. In attestation whereof I have hereunto subscribed my name and affixed the seal of said Court at Peru this 13th day of April 1869                             Jno A Graham Clerk CC P. Ind

Posted by Brenda Leyndyke at 8:13 AM