The Gift of an Autobiography: Junior High Friendships and Sports

I will continue sharing my dad's autobiography with some of his writing about Junior High at Lacey Junior High School, in Hazel Park, Michigan. If you haven't figured it out yet, sports played a HUGE role in my father's life. His autobiography takes you back to 1938. 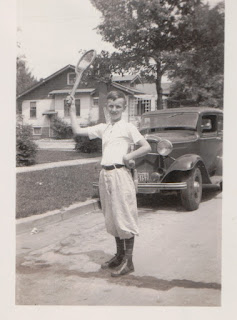 In 1938, I entered Lacey Junior High School, located on the main corners of Hazel Park at 9 Mile Road and JOHN R which was about the same distance as Hoover, only in the opposite direction. It was at Lacey that I was first introduced to basketball as a sport which I immediately became addicted to. I played on the 7th and 8th grade first teams. This was still in the days when the one hand shot was unheard of at this level. The games we played were low scoring usually ending with both teams score somewhere in the teens. I compare our team then with today’s junior high teams and I’m sure we would be blown off the court. I was never a scorer, but surprisingly good defensively and usually was assigned to guard the opposing team’s high scorer, a trend which continued for me on JV and Varsity later in high school.

In the spring, we still played softball and I continued my participation in that sport. Nothing, I can recall about my academics at Lacey that stand out. I continued to get above average grades and did my studying in study halls, so I didn’t have to lug books home after school or practice. My mother had other ideas, however, and insisted I bring homework home with me, so I always lugged a book or two home, but didn’t get a lot of studying done because I had already studied for next day in study hall. I do remember a pretty classmate catching my eye, a girl named Shirley, and would talk to her occasionally when opportunity presented but was too involved in athletics to have time for girls.

In the summer, I didn’t have any chores to do so I spent a lot of time with my buddy’s playing softball and developed an interest in tennis. A buddy and I frequently would have our mom’s pack a lunch and we would take off with our bikes and tennis rackets and head for Palmer Park which was at least a six-to-seven-mile ride.  When arriving we had to sign up to reserve a court for an hour at a time. After playing for an hour, we would bike over to a concession stand get a bottle of pop, find a park bench or table, and eat our lunch.  When finished eating, back to the courts for another hour of tennis and then the long ride home.  Another summer activity was golfing in a vacant lot, two lots to the north of our house.  My brother Hank was a caddie at Red Run golf course at the time and got me interested in the game.  I had a 7 iron and a couple of golf balls and would dig a couple holes about 20-25 yards apart and play hours at a time always trying to better my score. 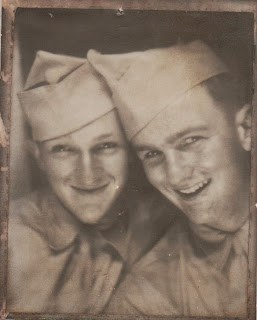 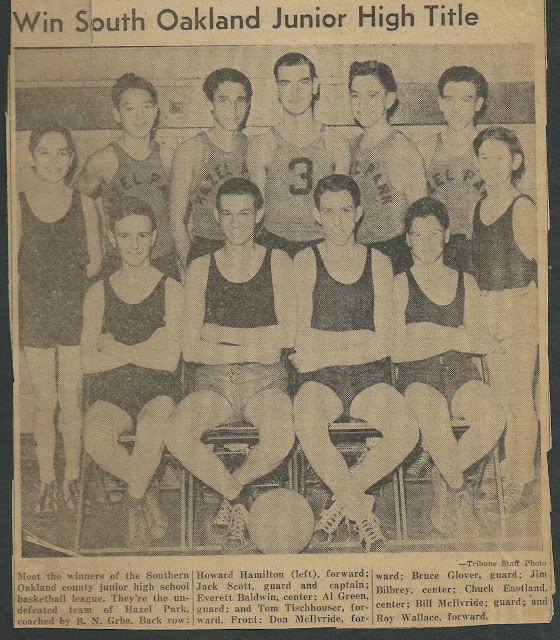 Bruce's friends are in the front row: Standing, Don McIlviride, Bruce, then the last two seated on the right, Bill McIlviride and Roy Wallace.

I met some boys who turned out to be particularly good friends throughout the rest of my high school days and even during and after the war and into college.  Three of the McIlvride boys were especially close to me, Don, Bill, and Gord.  Bill and Gord were brothers, whose dad was Robert.  Robert knew Charley Gehringer, the Tiger 2nd Baseman.  Don was the son of Harry and Birdie.  Harry was a brother of Robert.  During high school, Gord and I golfed together a lot in the summer.  Don and Bill were teammates of mine throughout high school. Bill Fisher was another good friend I first met at Lacey.  Although not an athlete Bill and I remained good friends throughout high school and both of us served in the same Infantry Battalion in World War II in Europe.  Another good buddy I met at Lacey was Roy Wallace a little guy, but an outstanding athlete.

In the summer between Junior High and High School I caddied for the first and only year at Red Run, a private course located in Royal Oak MI near 12 Mile Road and Woodward Ave.  In those days we made something like 75 cents for carrying a bag that seemed to weigh as much as I did and if lucky might be tipped a dime. I didn’t particularly enjoy caddying as a lot of the golfers, in my opinion, were jerks that treated us like dirt. The main reason I stuck it out was that on Mondays the caddies could play the course free of charge. We would get to the course at the crack of dawn and sometimes before and get in 36 holes before noon. I don’t remember too much about my scores, but it was usually under 100, which is good for a beginner.

Posted by Brenda Leyndyke at 8:35 AM