My parents, Bruce David Glover and Audrey Jane Fredricks met in January of 1951. Here is the meeting in my dad's own words:

THE GREATEST DAY OF MY LIFE

On a cold winter day in mid January of 1951 with snow on the ground and a winter storm forecast I was eating my lunch in the school cafeteria (I believe it was a Wednesday) when Supt. Dunnavan dropped by and asked me if I would supervise the gym that evening as the town team was scheduled for a game with Manistee, which I had no problem with. I just needed to be there to see things run smoothly, open, close, gym, put out the lights, etc. As it turned out little did I think my life would forever change that beautiful stormy evening. The opponents because of the weather did not show up and the town team along with several spectators simply continued to shoot baskets. One young lady in particular caught my eye. When I told her it was ok to shoot baskets but please remove her street shoes, she replied something to the effect would I see her socks got washed or something close to that. I can honestly say after watching her awhile that I had to know more about her. I don't think I ever saw such a combination of beauty and athletic ability and wondered where in the world she came from. I was smoking in those days and went to boiler room for a few puffs and first thing I did was ask Ross Cook the janitor who that gal was. He said she was a Fredrick’s girl. I assumed she was an older sister to Ray, Norman, and Jeannie all of whom I either had in class or participated on the Baseball and JV basketball teams which I coached. She was with a secretary at the school Mickey Fredricks who was married to one of her older brothers. I think I might have mentioned something to Mickey the next day but put it out of my mind for the time being.

Anyway that Friday night we had an out of town game and afterwards I stopped in at Jim Barr’s house (the high school Principal) who frequently entertained coaches and teachers after a game. Lo and behold who was there but Audrey Fredricks the girl from the gym. I immediately started up a conversation with her and it didn’t take very long to make up my mind that this was a girl I wanted to get to know better. I walked her home that evening all of one block to her sister Kate’s home which was just up the street from where I was living. It was hard for me to believe I had been in Brethren for 5 months and just noticed her for the first time. I asked her for a date that night and we went bowling with Junie and Nancy Anderson to Manistee that Sunday.

They were engaged in the spring of 1951. Their announcement was in the Manistee News-Advocate, Manistee, Michigan paper on 4 May 1951. 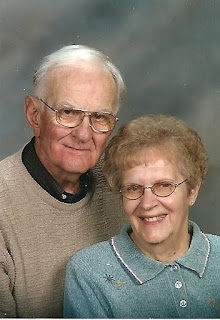 I am blessed to still have my parents in my life. They are celebrating 58 years of marriage, today. Happy Anniversary, Mom and Dad!
Posted by Brenda Leyndyke at 7:00 AM