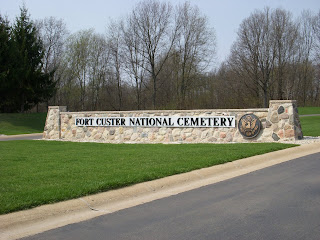 Fort Custer National Cemetery is six miles west of Battle Creek, Michigan. It is on 770 acres midway between Detroit, Michigan and Chicago, Illinois. It was named after General George Armstrong Custer, a native of Michigan. In 1943, when the first internment took place, it was known as Fort Custer Post Cemetery. It became a national cemetery in 1982.

I have had the privilege of attending services at Fort Custer. A Memorial Day ceremony is held on the Sunday before Memorial Day every year, at 2PM. This ceremony is a lovely tribute to our nation's heroes. In addition, committal services are held with about 1000 burials a year being conducted. 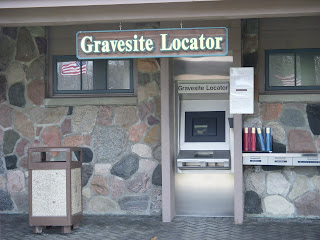 The cemetery is open to the public from dawn to dusk daily. When entering the flag lined drive you will come upon a grave site locator kiosk. Here you can use a computerized grave site locator or notebook binders to locate those who are buried here. Maps are available at the kiosk also. A nationwide locator for those buried in national cemeteries can be found at http://www.cem.va.gov/