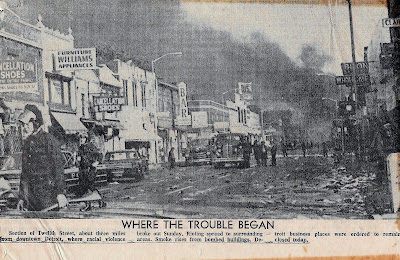 Section of Twelfth Street, Detroit, Michigan
﻿
I am in the process of going through my childhood scrapbook, which is a mess, and came across pages of newspaper clippings about the Detroit Riots.  I was 9 years old on July 23, 1967, the day the riots began and I remember the newspapers, and television news, were full of reports on the riots.  I don't know why I was so interested in this.  I remember talking to my mother about it and I clipped lots of pictures and articles out of the Detroit papers.  I was amazed at the pictures of people 'stealing' looting from stores.  I thought that was horrible!

I grew up about 100 miles north of Detroit.  We would go to visit my Uncle Hank and Aunt Mabel, who lived in Ferndale, Michigan, a suburb of Detroit.  My dad grew up in Hazel Park, Michigan and my grandmother lived there for awhile.  We would go to the Detroit Zoo and to Tiger Stadium during the summer and sometimes go school shopping there.  I guess because we had been there a few times, I was amazed at what was going on in Detroit that summer.

The Detroit Riots started July 23, 1967 and lasted four days until July 27th.  Thirteen thousand troops, mostly National Guard, were called in to restore order.  Six people were killed and 200 injured during the riots.  The rioting started after a pre-dawn police raid on an illegal bar, which led to the arrest of 73 people. 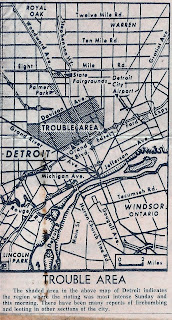 Email ThisBlogThis!Share to TwitterShare to FacebookShare to Pinterest
Labels: Detroit