Before I ordered the pension file for my great great grandfather, Samuel Stillman Glover, Jr., I had researched his marriage.  I found a record for Stillman S. Glover and Ada L. Dyer, who were married Aug 2d, 1857 in Adrian, Michigan.  I was pretty sure I had the right couple, but you never know as the names weren't exactly right.

Included in Samuel's pension file was the documentation for his marriage, below. 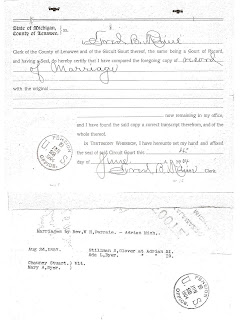 The top half of this copy is from the County Clerk for Lenawee County in Michigan.  He certified that he compared the copy of record of marriage (bottom half above) with the original in his office and found it to be correct.  It shows that Stillman S. Glover and Ada L. Dyer were married at Adrian, Michigan by Rev. W. H. Perraie on Aug 2d, 1857.  Witnesses were Chauncy Stuart and Mary A. Dyer. 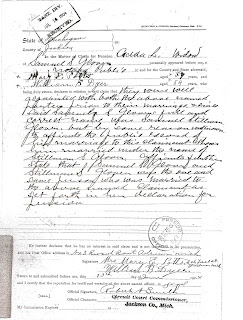 The other evidence was in the form of a document sworn by Mary E. Potts and William B. Dyer.  Mary and William are Adeline Dyer Glover's sister and brother.  They state that "they were well acquainted with both the above named parties prior to their marriage and since said Samuel S. Glovers full and correct name was Samuel Stillman Glover, but by some reason unknown to affiants the public record of his marriage to this claimant shows him married under the name of Stillman S. Glover.  Affiants further state that Samuel S. Glover and Stillman S. Glover were the one and same person who was married to the above name claimant as set forth in her declaration for pension."

So, Stillman S. Glover is Samuel Stillman Glover, Jr.  I am guessing he use to go by Stillman as not to confuse him with his father or his brother, who was named Samuel Worcester.