Chism or Chum? Help! Who Is He? 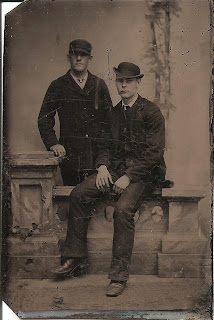 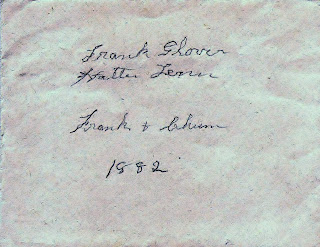 The above picture and envelope below it were found in Hattie Fenn Glover's Bible, which is in my possession.  This picture and a picture of Frank H. Glover and Hattie Fenn on their wedding day were both in the envelope.  So, who is Chism? or is it Chum?  What do you think?
Frank H. Glover and Hattie Lodema Fenn were married on 12 May 1882 at the 1st Congregational Church in Jackson, Michigan.  Their witnesses were Frederick Wheeler and Mary S. Karnick.  Could Chism be a nickname for Frederick Wheeler?
Who else would be important enough to have their picture taken with the groom?  The other possibility might be a brother.  Of course, I am just speculating at this point as I really don't know who it is.  Frank H. Glover had three brothers that would be around his age; Charles, who was 23 at the time, William, age 21, and Louis, age 16.
Any ideas?  Please take your best guess as to his name and leave a comment.  Thank you for visiting my blog.﻿
Posted by Brenda Leyndyke at 6:00 AM