We're Loyal to You Harbor Beach! 52 Weeks of Personal Genealogy and History 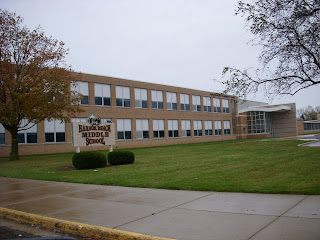 Harbor Beach Middle School, 2011
Week 45:  High School.  Describe your middle and/or high school.  Was it a large or small student body?  Is the school still in existence today?  How has it changed since you went there?

The junior high was located on the front, north end of the school.  It was a two-story wing.  I remember lots of wood cabinets and an old school feel.  Harbor Beach was experiencing growing pains and some of our classes were held in the Our Lady of Lake Huron (OLLH) Catholic school.  OLLH was a short walk across a field to 2nd Street.  I walked there for 7th grade Home Economics.

A new addition to the high school was added during my Freshman year.  This is the school I remember the most.  We didn't have to share lockers as we each got our own.  The core of the school was the high school office.  Four hallways went out from there.  The hanging out place for many students was the four corners.  To the north of the office was the wing for business and shop classes.  The east hallway led to the history and English wing.  The library was located down this hallway with English classrooms adjoining it.  The south hallway was a short hallway with just a couple of classrooms.  The west hallway held the Home Economics classrooms and led to the gym and another wing that housed the science and math classes.

Recently, a new addition was added.  The Science and Math wing was converted to the elementary school.  The old junior high, now the middle school, is still in the 2 story part of the school.  I haven't seen the new addition, so I don't know what it is like.

My dad, Bruce Glover, was a teacher and coach at my high school.  He taught physical education there.  I never had my dad for a teacher as phys. ed. classes were not co-educational at the time.  He would be teaching on the other side of the wall during my gym classes.  I did have teachers who were friends of my dad and it was interesting to see them in social settings.

The Harbor Beach School song was the University of Illinois' fight song.  I loved the line "we know you have sand" and Harbor Beach did have sand as it was on the shores of Lake Huron.
Posted by Brenda Leyndyke at 8:08 AM