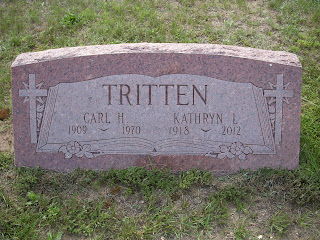 Carl H. Tritten was born 3 February 1909 and died 6 August 1970 in Brethren, Manistee, Michigan.  He married Kathryn Louise Fredrick 8 May 1938 in Brethren.  They had two children, Kathryn Marie and John Tritten.

Kathryn 'Kate' Louise Fredrick was the oldest daughter of Otto August and Daisy (Graf) Fredrick.  She was born 6 September 1918 in Brethren, Michigan and died 2 January 2012 in Manistee, Michigan.

They are buried in Brethren Cemetery, Brethren, Michigan.  They were my aunt and uncle and my godparents.  Rest in Peace Uncle Carl and Aunt Kate.
Posted by Brenda Leyndyke at 11:39 AM