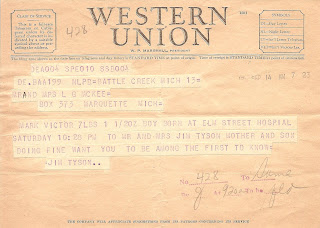 MARK VICTOR 7LBS 1 1/2 OZ BOY BORN AT ELM STREET HOSPIAL(sic) SATURDAY 10:28 PM TO MR AND MRS JIM TYSON MOTHER AND SON DOING FINE WANT YOU TO BE AMONG THE FIRST TO KNOW=JIM TYSON.

The above telegram was found in Hattie's Bible.  It was dated 14 September 1952.  Hattie died in 1951, so someone else was keeping things in her Bible, probably her daughter Adeline.

The following are mentioned in the telegram:

Mr. and Mrs. Jim Tyson is James Victor Tyson and wife, whom I haven't researched yet.

Jim Tyson-James Victor Tyson.
Posted by Brenda Leyndyke at 8:05 AM