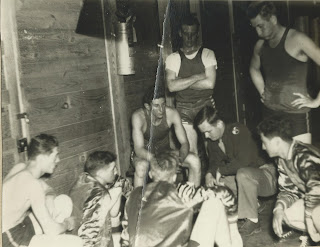 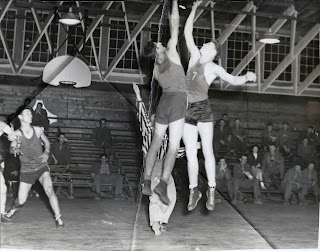 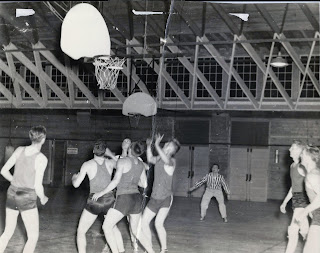 My dad, Bruce Glover, served in the U.S. Army during World War II.  Victory was achieved in Europe and he was sent back to the United States to wait for further orders.  He was assigned to Fort McClellan, Alabama.  During his time at Fort McClellan, he coached a basketball team.  This team was the first of many as my dad went on to be a coach for another fifty years.  Below are his memories, in his own writing, of that time:

"The most beautiful sight I think I ever witnessed up to this time of my life occurred on the voyage home when our ship entered New York Harbor and for the first time I saw the “Statue of  Liberty.”  What excitement to finally be coming home to see Mom, Dad, and all my friends.  I was given a two week furlough before an assignment at Fort McClellan, Alabama as a physical Training and Bayonet  Instructor.  We all figured it would only be a matter of time before we would be heading to the Pacific Theater.  I did not have enough points to get out at this time.  While at Fort McClellan I also coached and played on a company basketball team in the evening for recreation. We didn't have a very good team. At the end of the season there was a post championship tournament in which the 7 regiments stationed there selected all star teams from their regiments.

Colonel Reeder the Regimental Commander of the 7th Regiment of which I was a member asked me to coach the team which I gladly accepted.  We had two weeks to practice, pick our team and get ready for the Tournament.

The 3rd Regiment won practically every  year and were heavy favorites as they had some college players including one who played some at Notre Dame.  I was pretty discouraged when I held our first couple of tryouts as there seemed to be hardly any talent at all.  Then one night I heard a knock on my door in the Officer’s quarters and a Captain from another company in our Regiment said he just got a shipment of new trainees fresh out of New York high schools and they wanted to play basketball and was there any openings.  I would have accepted anyone at this time and told them to report to the gym the next night at 7 o’clock.  5 boys reported and all of them had either played together or against each other in New York city schools.

WOW ONE TRIP UP AND DOWN THE FLOOR AND I HAD MY STARTING FIVE.  Jack Gilcrest was a 5-10 guard who could shoot the eyes out of the basket.  An Italian lad named Pommerano was 6-2 had all the moves in the middle, shooting, passing, and rebounding.  The other 3 boys were equally impressive and they blended together as a team as if they had played together all their lives.  To make a long story short we won the tournament breezing handily through the first two games and whipping the 3rd Regiment in the finals by 2 points.  Needless to say I was, along with the team, the Toast of the Regiment as a result.  My biggest contribution was probably staying out of the way and letting them play.  I truly believe this experience was a catalyst for launching my coaching and teaching career at Western Michigan University in Kalamazoo following my release from the service."

Posted by Brenda Leyndyke at 3:58 PM