While trying to identify the parentage of my third great grandmother, Vinera Powers Glover, I decided to research the family of her sister, Mary Ann Powers, who married Charles Williamson Glover.  Charles Williamson Glover is the brother of Vinera Powers husband, Samuel Stillman Glover.  This research led me to Charles and Mary Ann Glover's son, Henry P. Strong Glover.  Henry P. Strong Glover is a fascinating research subject, whom I look forward to writing more about.

One of the benefactors of this wealth was the University of Michigan.  Henry P. Glover donated the DeCriscio Collection of Latin inscriptions.  Henry P. Strong Glover donated a collection consisting of over 250 inscriptions on marble, brick, lead pipe, etc.  The earliest piece is from the time of Augustus in the fifth century.  Henry donated this collection to the University of Michigan in 1899.

News of this donation was reported from Vermont to Michigan to North and South Dakota.  One of those reports is below: 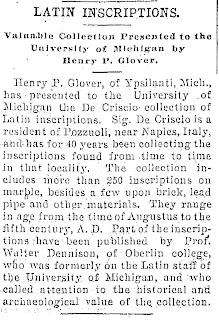 Valuable Collection Presented to the University of Michigan by Henry P. Glover.

Henry P. Glover, of Ypsilanti, Mich., has presented to the University of Michigan the De Criscio collection of Latin inscriptions.  Sig. De Criscio is a resident of Pozzuoli, near Naples, Italy, and has for 40 years been collecting the inscriptions found from time to time in that locality.  The collection includes more than 250 inscriptions on marble, besides a few upon brick, lead pipe and other materials.  They range in age from the time of Augustus to the fifth century A. D.  Part of the inscriptions have been published by Prof. Walter Dennison, of Oberlin college, who was formerly on the Latin staff of the University of Michigan, and who called attention to the historical and archaeological value of the collection.
Posted by Brenda Leyndyke at 12:23 PM