New Hampshire-Genealogy by the States 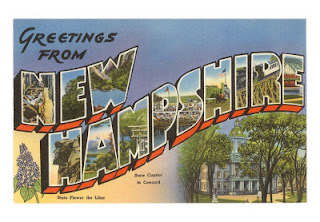 Jim Sanders at Hidden Genealogy Nuggets website and blog has created the Genealogy by the States blogging prompt, suggesting that bloggers write about an ancestor or one of our families that have a connection to that state. Each week a different state is featured.  This week's state is New Hampshire.

The shifting state boundaries has made researching New Hampshire an interesting challenge.  The boundary between Massachusetts and New Hampshire wasn't defined until 1741.  New Hampshire gave land grants to land that was claimed by New York and that land eventually became Vermont.  Present day boundaries were defined in the mid 1700's.  New Hampshire became a state in 1788.

Family Search has the New Hampshire, Marriage Records 1637-1947 online and a record of Moses Poor and Hannah Santclare (indexed as Santetar) marriage was found on 31 March 1767 in Hampstead, Rockingham, New Hampshire.  Moses Poor served New Hampshire as a Private in Captain Elisha Woodbury's Company and Colonel Jno Stark's Regiment in the American Revolution.  He was killed at Bunker Hill in 1775.  Service records can be found in the New Hampshire State Records (see link below).

Other New Hampshire online sources I have used include:


What is your favorite New Hampshire resource?