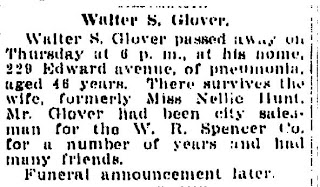 
Walter S. Glover
Walter S. Glover passed away on
Thursday at 6 p.m. at his home,
229 Edward avenue, of pneumonia,
aged 48 years.  There survives the
wife, formerly Miss Nellie Hunt.
Mr. Glover had been city sales-
man for the W.R. Spencer Co.
for a number of years and had
many friends.
Funeral announcement later.
Posted by Brenda Leyndyke at 8:04 AM