I Will Haunt You! Tombstone Tuesday 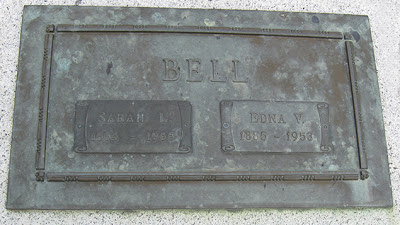 I was so excited when I received notification that my picture request for my grandmother, Sarah L. Bell, had been fulfilled.  I never thought I would see her gravestone as it is in Queen's Park Cemetery, Calgary, Canada.  The first thing I said to my husband when I saw the picture was, "I will haunt you, if you ever bury me in the same cemetery plot with another wife!"   So far, I am his only wife and he thought I was weird to even bring something like that up!  But, he is getting use to my genealogical ways-I think.

My grandmother married her second husband, Ray Bell, about four years after my grandfather's death.  They moved to Calgary, Alberta, Canada.  Grandma Bell died in Calgary on 31 March 1965.  She is buried in the same plot and has her name on the same gravestone as Ray Bell's first wife, Edna.

My grandmother had wished to be buried in Park Cemetery, Marquette, Michigan with her first husband, Harry Glover.  A couple of years ago, my parents and I visited Park Cemetery and three plots had been purchased, only one was used-Harry Glover's.

I imagine the paper work to transfer a body across country borders and the cost involved factored into the decision.  But, still I am serious that I will haunt Kirk, if he does this to me.  I guess I don't share well.  I want my own headstone and plot.  I want one with a QR code, too!  One that has my genealogy on it.

Posted by Brenda Leyndyke at 7:51 AM