I Have a Michigan Governor in My Family Tree 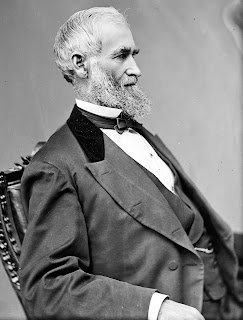 It took me awhile to figure out my connection to the 19th Governor of Michigan, Josiah Begole, but I think I calculated the relationship right.  He is my first cousin, five times removed.  I bet you are impressed.  I don't usually blog about such a distant relative, but since he was the Governor of Michigan, I am going to.

Josiah Begole was born 20 January 1815 in Groveland, New York to William Begole.  He migrated to Michigan in its' early years settling in Genesee county. He worked in a variety of occupations prior to his election as governor. Early political jobs included Flint, Michigan councilman and Michigan Senator.

Josiah Begole began his political career as a Republican.  He was a Greenback and Democrat at the time of his election for Governor.  He was anti slavery and an early supporter for women's rights.

Josiah Begole was Governor of Michigan from 1 January 1883 to 1 January 1885. He ran for re-election but was defeated and only served one term as Governor. Governor Begole returned to his home near Flint, Michigan and lived there until his death on 5 June 1896 at the age of 81.

Josiah Begole is the only prominent politician in my family tree, that I know of.  I guess if you only have one, it might as well be one who was Governor of Michigan.  How cool is that?

Josiah Begole is the first cousin to my third great grandmother, Eleanor Begole.  Eleanor is the daughter of Thomas Begole and Ann Matelda Nancy Bowles.  Thomas Begole and Josiah's father, William were brothers.

Photo credit:  This image is a photograph from the Brady-Handy Collection, which was purchased by the United States Library of Congress in 1954. Mathew P. Brady died in 1896 - making his images in the public domain worldwide; Levin C. Handy died in 1932. While, in theory, some of Handy's photographs could have been taken after 1922 and thus have qualified for copyright, according to the library, all images that make up the collection are considered to be in the public domain.
Posted by Brenda Leyndyke at 7:59 AM