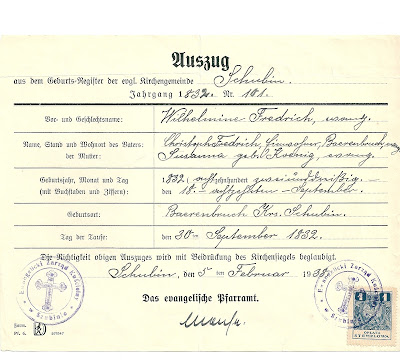 This record is for Wilhelmine Fredrich, daughter of Christoph Fredrich and Susanna Koenig.  She was baptized 30 September 1832.  I received this record from one of Wilhelmine's descendants, Michael.  Michael lives in Germany and we have written back and forth a few times and shared information.  I wrote about our connection here and here.

Michael and I share a common ancestor, Susanna Koenig, mentioned above.  My great grandfather, J. August Fredrich, and Wilhelmine Fredrich were brother and sister, making Wilhelmine my great grandaunt.

I posted the above record at the German Genealogy Facebook page and asked for help transcribing it.  The information I received was that it is an excerpt from the birth registers of the Protestant Parish of Schubin.  Parents were Christoph Fredrich of Baerenbruch and Susanna born Koenig. Wilhelmine's birthplace was listed as Baerenbruch, Kreis Schubin.  The date the excerpt was made was 5 February 1938. I wish I could read German.  I would love a full translation of it.

J. August Fredrich immigrated to Manistee County, Michigan, but his sister, Wilhelmine stayed in Germany.  She was one of the few family members who didn't emigrate.  Her mother, Susanna, and three of her sisters, Henriette, Amalia, and Ottilie came to Manistee County after J. August did. There were two other siblings, Auguste and Wilhelm, that I believe stayed in Germany.  More research is needed on them.

One never knows what kind of information an ancestor's sibling's record will give you.  This one gave me clues to my research and I look forward to finding out more.

Updated January 2014:  A very generous person, Rafael, sent me the below translation for the above record.  I appreciate it so much.  Thank you Rafael.


1. I’m 90% certain that the handwritten abbreviation that comes at the end of each family member’s entry is evang., which means ‘Protestant’ and makes perfect sense in context.
2. The handwritten entry for the father’s profession is unclear. The first half of the word may well be ‘Firms-’ (meaning ‘company,’ in the sense of a commercial enterprise or business), so the father could have been involved with a business of some kind.


3. I’ve translated the German word Kreis as ‘district’ here, but it can also be translated as ‘county,’ since either word can signify an administrative subdivision of a province or state.
Posted by Brenda Leyndyke at 8:06 AM