Those Places Thursday: We Bought Our First House!

It wasn't long after the birth of our first child, Kirsten, that my husband and I decided it was time to move out of our small apartment and into a home.  We had to decide if we wanted to rent or buy. We looked at where we planned to be in ten years and came to the conclusion that we would stay in our small community of Deckerville.  We decided that buying a home would be the way to go.

We met with a realtor and went to see a few homes.  There wasn't much available to purchase in Deckerville.  We expanded our search to the nearby town of Sandusky, about 12 miles away.  We weren't finding what we were looking for until I saw an advertisement of a house for sale by owner. 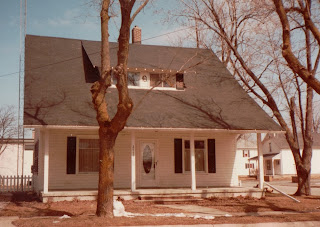 April 16, 1984  We always joked the "B" on the house was for Brenda, but it was for Block, the previous owners.  We took it down after we moved in.

2457 Maple Street, Deckerville, Michigan was a beautiful home on a corner lot, complete with a white picket fence.  We made an appointment to view the home.  It was a well maintained, two story, four bedroom, 1 1/2 baths house.  It was just what we were looking for.  We made an offer on the home, they countered, we countered again and it was ours!

It was a home that we could see out the living room window of the apartment we were living in. The move wouldn't be hard!   Also, I knew one of the owners of the home.  I had gone to high school with her.  Everything was falling into place.

We moved into our home in April of 1984, Kirsten was four months old.  We went from a cramped apartment to a home with lots of empty space. We would have fun filling it up.

The house had two big porches that went along the front and back of the house, the oval lead glass front door opened into a dining room, that we needed to furnish. The living room was to the left with a bedroom off of that.  We used this room as a den and later, a playroom.  The large kitchen was off the dining room.  A half bath was off of the kitchen.  The stairs led from the dining room up to three nice sized bedrooms. Another room that was too small to be a bedroom, became my sewing room, was at the end of the hall.  A full bath completed the second floor.  There were pull down stairs to an attic that ran the length of the house.  I loved everything about the house but the basement.  It was a Michigan basement, cold and damp.  I had to do laundry down there, but that was about it. 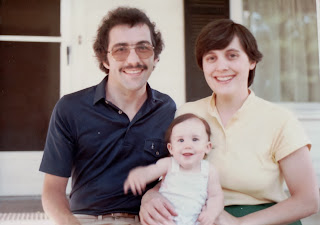 Kirk, Kirsten and Brenda on the front porch, July 1984

Although, we only lived in our home two and a half years, I have many memories of living here. It is where:


We didn't stay in Deckerville, like we thought we would, because Kirk had received his Master's degree in school counseling and elementary counseling jobs were opening up.  We decided if we were going to make a move, now would be the time. Kirk applied for numerous jobs and accepted a job offer in Harbor Springs, Michigan, 240 miles from Deckerville.

We put our house on the market and waited, and waited.  We weren't able to sell it. Kirk had to move to Harbor Springs without Kirsten and I.  Eventually, my seven month pregnant self and Kirsten moved to Harbor Springs.  The house sat empty and it was tough making our house payment and our rent payment.  We decided to rent it to a teacher and her husband.  The spring rolled around and we accepted an offer on the house. One of the conditions of the sale was that the renters had to move out before they took possession. We gave our renters their notice and they moved out.  The buyers decided to back out of the purchase, sigh!, and we were left to put it back on the market.  Needless to say, we learned a lot about selling a house with our first try. Eventually, we sold it, but didn't recoup our down payment.  We were just glad to be able to sell it.

I loved that house and Kirk and I have always said we would have loved to have moved it, sans basement, because we wouldn't buy a house that big again.  I have fond memories of Deckerville and it was sad to leave good friends, but our family life was just beginning and their were many memories yet to be made.

Posted by Brenda Leyndyke at 7:59 AM

Email ThisBlogThis!Share to TwitterShare to FacebookShare to Pinterest
Labels: Deckerville, Those Places Thursday