My daughter, Kirsten, turns 30 years old this year.  It doesn't seem like it has been 30 years since she was born.  She grew into a beautiful, talented young women. One that today brings memories of her third birthday, in 1986. 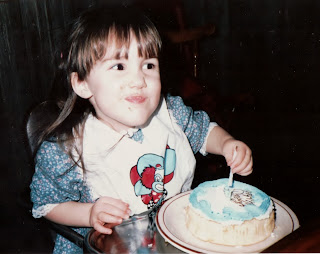 Her celebration was a simple family dinner with Kirk and I.  We went to La Senorita Restaurant in Petoskey, Michigan.  We were living in Harbor Springs Michigan at the time, about nine miles from Petoskey.  Kirsten liked LaSenorita because it had a treasure chest of little toys and as she left she could pick one to take home.  The picture above is Kirsten at the restaurant with a cake provided by the restaurant. The staff sang Happy Birthday to her.

The day was spent quietly at home.  I was ninth months pregnant with a due date six days away.  Kirsten and I waited for Kirk to come home so she could open her presents. Once her gifts were opened we played with them for a little while and then went to dinner. 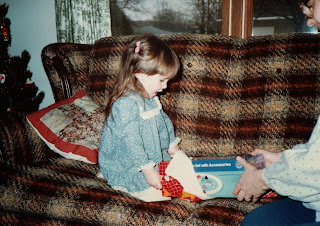 I love the expression on Kirsten's face. 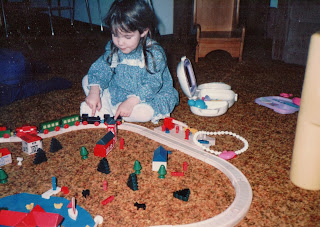 Kirsten playing with her train.
Everyone needs a pearl heart necklace to play trains with.

One of her favorite presents was a T.C. Timber wooden train set.  Harbor Springs had a wonderful toy store, Rocking Horse Toy Company, and they had a wooden train set up for the kids to play with.  Kirsten loved going to the toy store and she always played with the train.  We bought her a starter train set.  It had track pieces, a freight train, trees, and a couple of buildings.  She loved it.  We still have the train set.  Many additional pieces were purchased throughout the years.  It is a classic toy and one I had as much fun with as Kirsten. 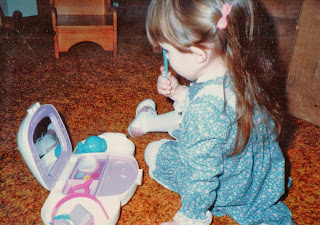 "Putting make up on" with her Fisher Price Vanity Set, a birthday gift.
It came with play nail polish, perfume, comb, bracelet with animal charms,
a pearl necklace with heart pendant, headband, and a key to lock it up with. 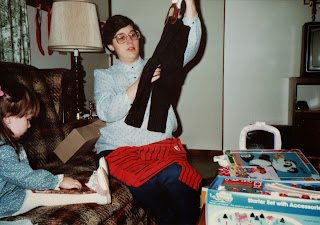 Kirsten opening a gift and a very pregnant mom folding her suspender outfit.
Other gifts in picture includes a bear puzzle.

We didn't have a big party for Kirsten that year, but I remember how nice having dinner with just the three of us was.  It wouldn't be long before Kirsten would be a big sister.  Kirsten was very verbal at the age of three and I remember her talking a mile a minute as she opened her gifts.  She was very excited about the train set and vanity set.  Both of those toys were played with a lot.  Kirsten and I would put make up on each other and do each others' nails. We would spend hours playing with the train set.  It was fun to see the track configurations that Kirsten would come up with.  Good times and good memories.  Happy Birthday, Kirsten.


Posted by Brenda Leyndyke at 8:03 AM