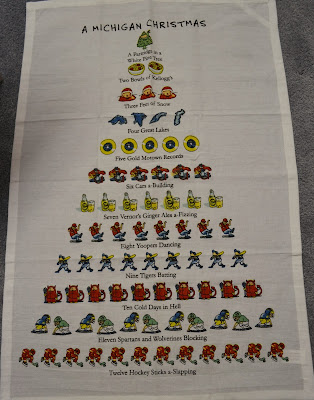 My daughter, Kirsten, and her mother-in-law, Leslie, have an annual tradition of attending the One of a Kind Show in Chicago, held at the Merchandise Mart.  Artists from all over North America show their wares and let shoppers find a truly, one of a kind gift.  I was the recipient of one of the artists, David Price, work, 'A Michigan Christmas' cotton towel. I love it.  It is beautiful enough to frame.

Here are the 12 Days of A Michigan Christmas and their meaning:

Posted by Brenda Leyndyke at 7:36 AM