The Brethren Heritage Museum has been a wonderful source to discover more about the early days of Brethren Michigan.  My ancestor's, Valentine Graf and Johann August Fredrick, families were early settlers of the area and their children attended one room school houses. 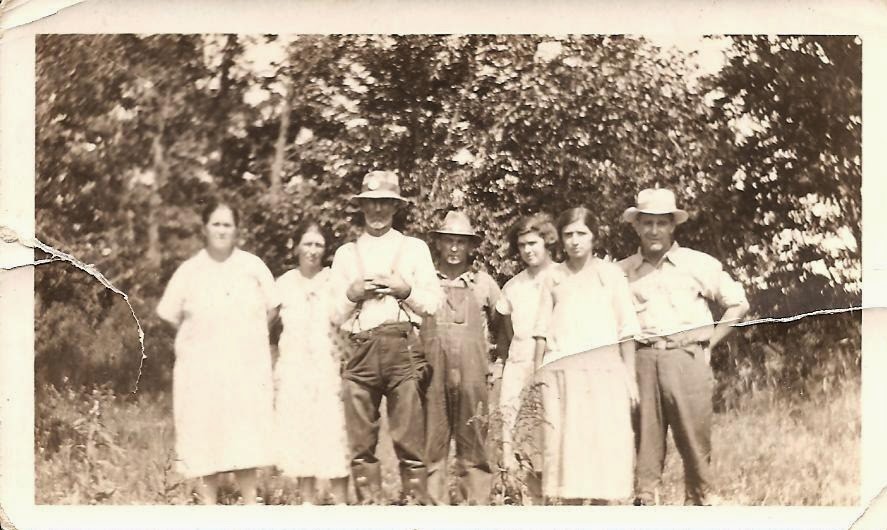 Valentine Graf and his family arrived in Dickson Township, near Brethren, Manistee county, Michigan around 1900, after the 1900 Census was taken. He settled on property on what is now, Graf Road. Valentine's family, at this time, included:
Two more children: Nina Belle Graf, born August 1901, and Martha Beulah Graf, born August 1905 were born after their arrival in Michigan. 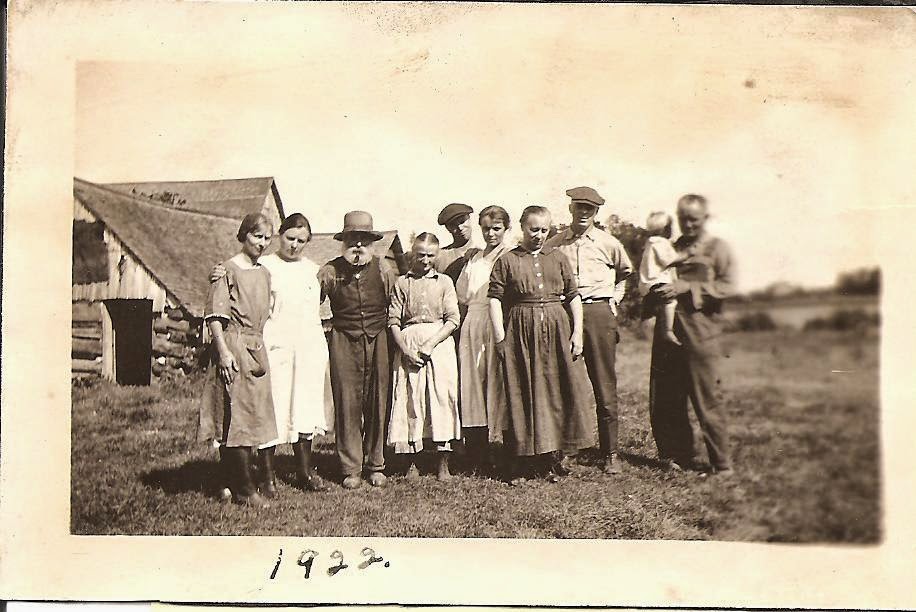 J. August Fredrick had settled in nearby Manistee by 1875.  He bought his property on Coates Highway, near Brethren, in 1901. August's family consisted of:
The first school in Dickson Township was in 1880.  It was known only as "Log Cabin School".  This would have been before my ancestors time in Dickson Township. 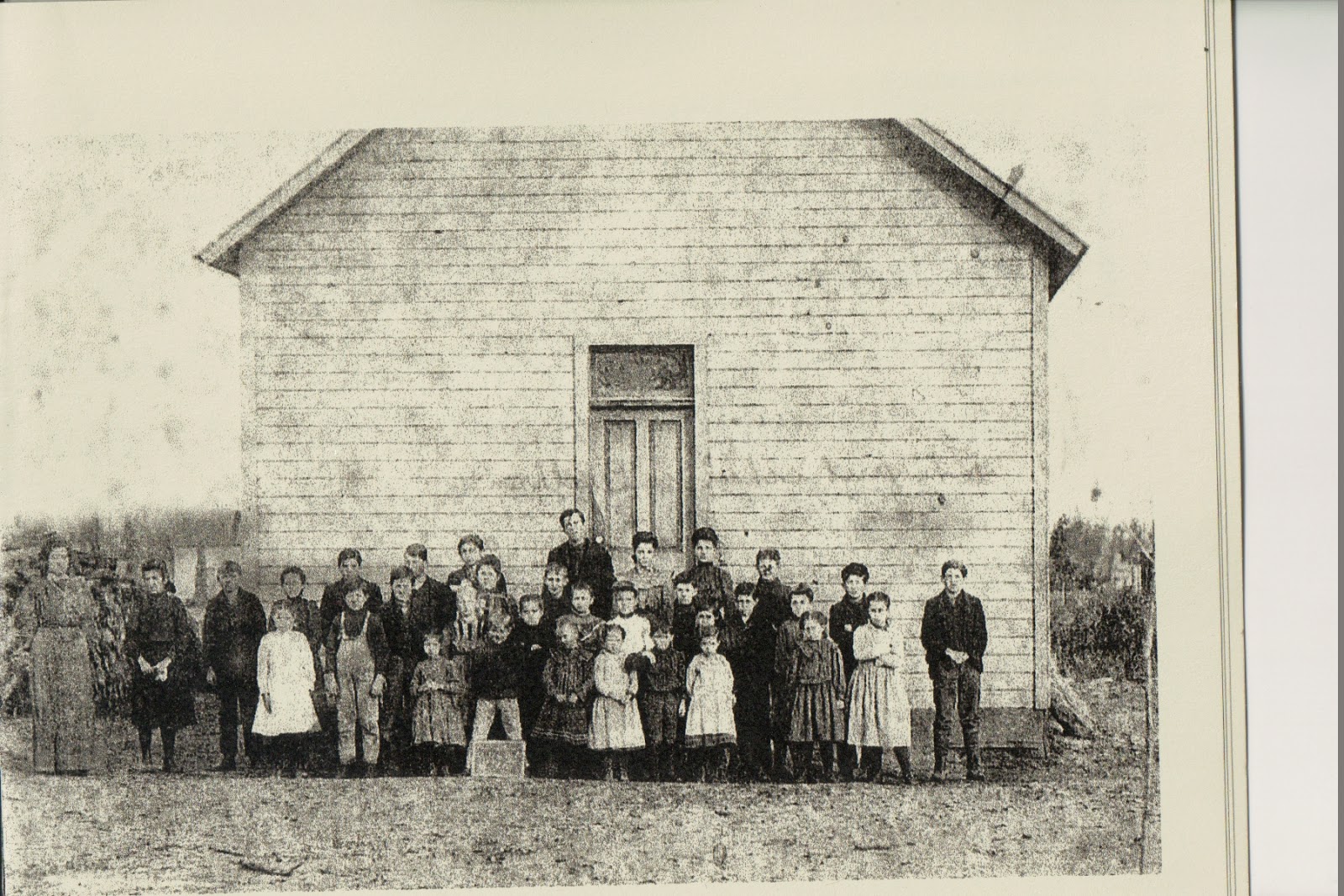 Brethren School #1 opened in 1902.  The above picture shows the school and children attending it.  I believe some of my family has to be in this picture.  I have looked at it with a magnifying glass many times, but I am not able to name which ones are Grafs or Fredricks.

If a child attended school from the age of five to about thirteen, which many rural children did at the time, I believe the following children would be attending the Brethren #1 School in 1902: 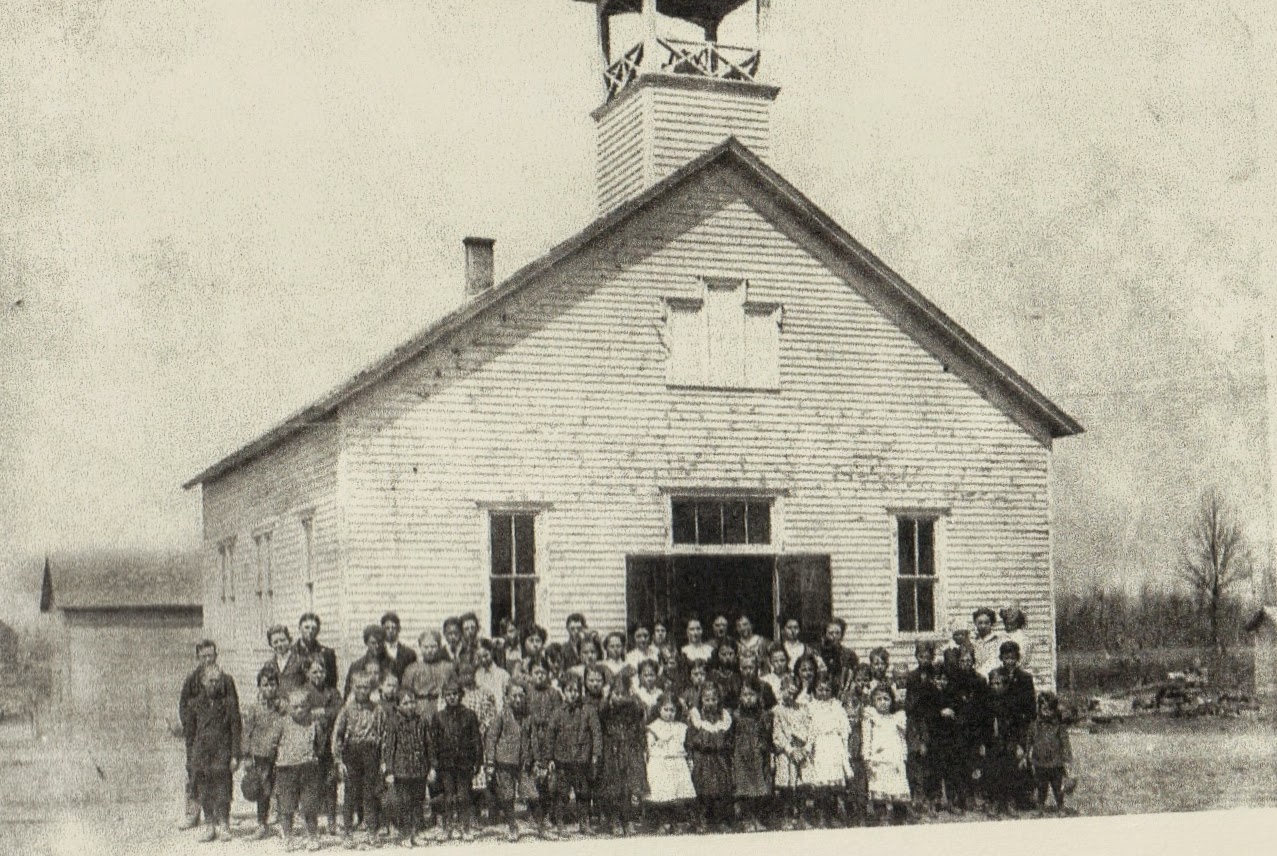 Brethren School #2 replaced the #1 school in 1907, because of the growing school age population. The Graf and Fredrick children and ages in 1907 would have been:
I have an early picture of my grandmother, Daisy Graf, as a teenager and by comparing the pictures, she might be the one in the very back row, in front of the door, second from the left, but I can't be positive. 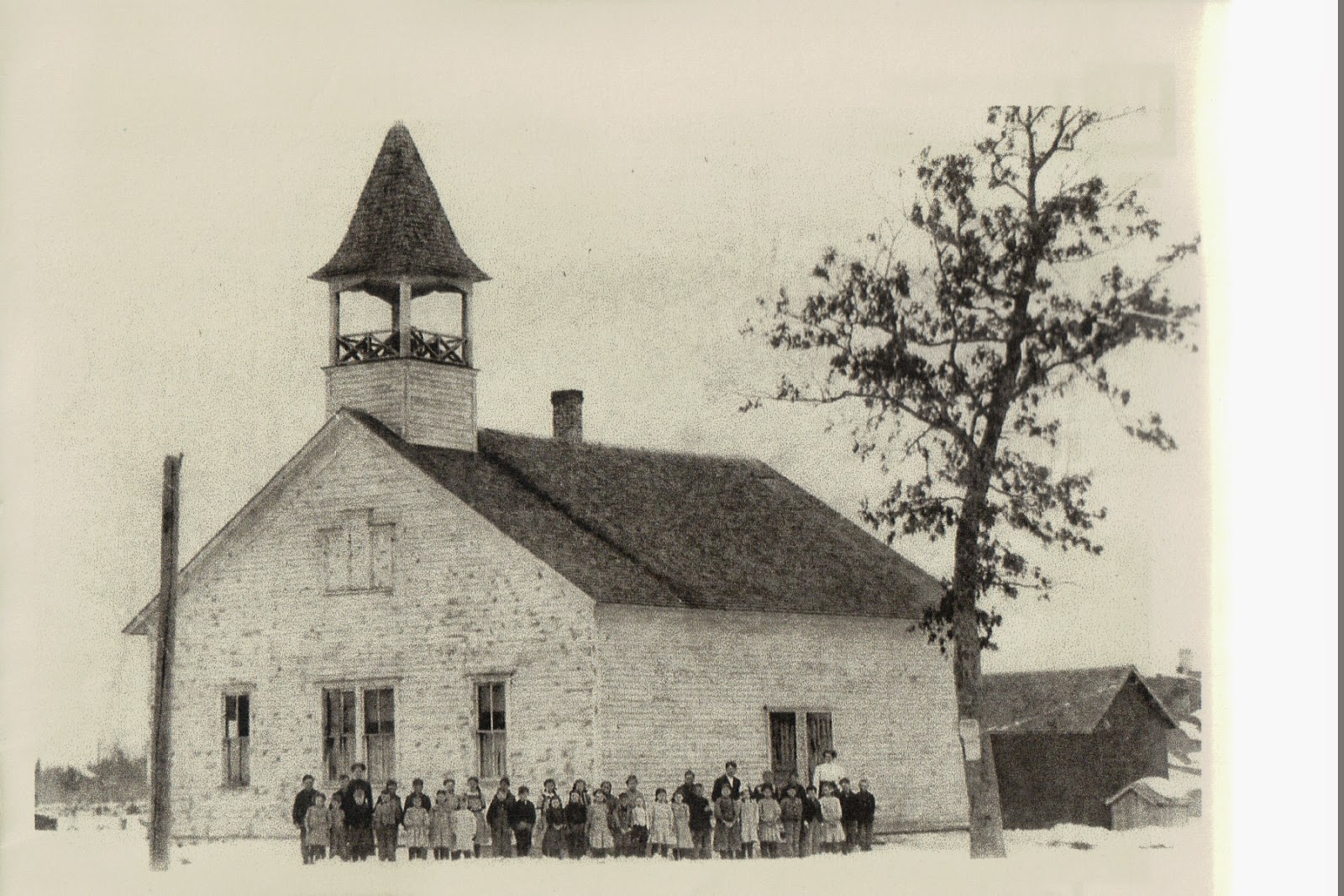 By 1917, most of the first generation Graf and Fredrick families are too old to attend school.  There were possibly three, Nina Graf (16), Martha Graf (12) and Leonard Fredrick (15).  Brethren School #3 was divided into two classrooms.  This school was only in existence for four years, until 1917, when the school district voted to consolidate schools and closed all the one room schools.  The faces on this picture are almost impossible to see, even with a magnifying glass.

The map below shows the One Room Schools in Dickson Township, Manistee, Michigan.  My ancestors attended Brethren School #1, #2, and #3, which are Numbers 2, 7 and 10 on the map. Those schools were on the corner of North Coates Highway and North High Bridge Road, at the four corners of Brethren, Michigan. Today, the old consolidated Brethren School Building is still standing on this spot with renovation efforts underway. 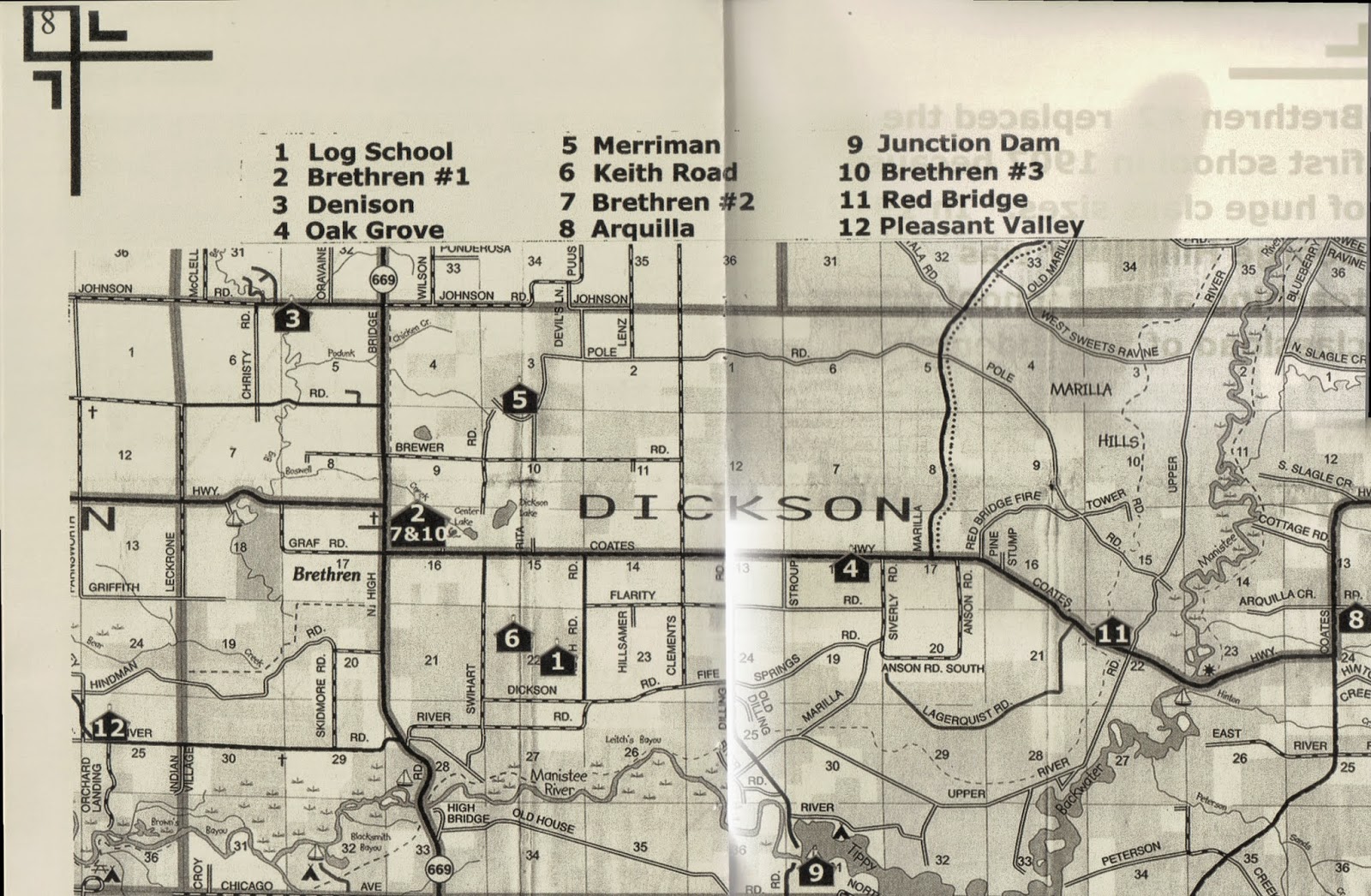 The Graf family lived on Graf Road, between N. High Bridge Road and the curve of Graf Road.  The Fredrick Family lived the next road up, Coates Highway, between Graf and Leckrone Roads, after the curve.

No one is left in the family to tell stories about their time in a one room school house, but I am sure if they were they would tell a very different story from what my education was like.
Posted by Brenda Leyndyke at 8:02 AM