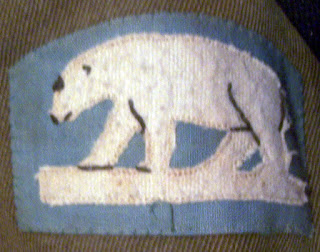 You may be wondering why I would blog about an infantry regiment that served in Russia for a Last Day Local post. It's easy. The group now known as the Polar Bears had its beginnings at Camp Custer, now Fort Custer, near Battle Creek, Michigan.
The Polar Bear Patch, shown above, worn by the returning soldiers from the 339th, but also the first battalion of the 310th Engineers, plus the 337th Ambulance and 337th Field Hospital Companies
On July 11-17, 1918, the 85th "Custer" division left Camp Custer, near Battle Creek, Michigan. 30,0000 soldiers made up the Custer division. The 85th Division consisted of the 337th, 338th, 339th, and 340th regiments. The 339th was made up of soldiers from Detroit and Southeast Michigan, mainly. 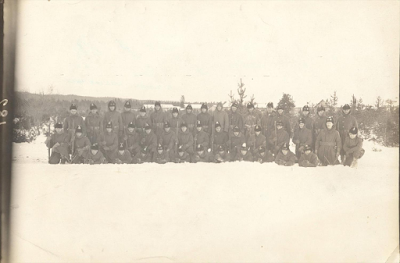 July 23, 1918, saw General Pershing detaching 4750 men from the 85th Division to form the American North Russia Expeditionary Force (ANREF). This regiment became known as the Polar Bears. The troops had no idea what they were being sent to do. The men decided on the name "Polar Bears" during withdrawal from Russia. The men served in frigid temperatures of 40-50 degrees below zero.

The troops traveled to England, through the Arctic Ocean to Archangel Russia, arriving on September 5, 1918. "Once the men arrived in Archangel it was discovered that many were deathly sick with the Spanish Influenza virus, so another 500 officers and men from the other three Infantry Regiments that had gone on to France were transferred to North Russia as replacements, arriving in Archangel on Sept. 30, 1918." (email from Mike Grobbel)

They continued fighting the Bolsheviks until April, 1919. The Polar Bears arrived home to Detroit on July 3, 1919, seven months after World War I ended. During these seven months, 94 ANREF troops were killed in action. "The soldiers were allowed to go home, if local, or stay in a local hotel; they had to be back at the Michigan Central railroad station by 8:00 AM on the 4th so they could travel to Belle Isle for the "Welcome Home" festivities. They departed on the morning of the 5th for Camp Custer and discharge from the Army." (email from Mike Grobbel) 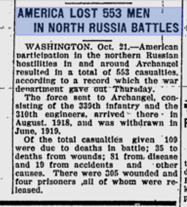 The Polar Bears suffered 553 casualties in Russia. 81 deaths were from disease, mostly from the Spanish Flu.

Brief Timeline of the ANREF's Service

Much has been written about the 339th Regiments time fighting the Bolsheviks. Family history researchers of this regiment will find wonderful primary sources available in Michigan. Books, scrapbooks, diaries, manuscripts, digital images, maps, publications, and more may be found.

A few Michigan resources to look for Polar Bear information can be found at:

1. Bentley Historical Library, 1150 Beal Avenue, Ann Arbor, Michigan 48109 A search using the words Polar Bears returned 177 results. Since the Bentley Library is a historical library none of the returns were about the animal polar bear.

a.     A Few of the Collections at the Bentley

ii.     Polar Bear Project Collection,1918-2019: Documents and correspondence, military discharge papers, and newspaper clippings. Most of the correspondence is between the library and family members who felt their soldier was left out of the collection.

iv.     Polar Bear Roster: a roster of the soldiers attached to the Polar Bear Expedition.

2. Sandusky District Library, 55 Sanilac Road, Sandusky, Michigan 48471. This small-town library in the thumb of Michigan has excellent genealogy related sources and they are online for you to explore. The search results doesn't allow me to save the url. To find the two collections below. Go to the library main web page, click on Genealogy, using the left sidebar go to Documents and scroll down for the Schroeder Scrapbook. For the Erickson memorabilia do the same, but click on Pictures on the left side bar.

a.     Collections at the library:

3. Detroit’s Own Polar Bear Memorial Association is “dedicated to the memory of the 339th Infantry Regiment, the 1st Battalion of the 310th Engineers, the 337th Ambulance Company, and the 337 Field Hospital of the U.S. Army’s 85th Division.” (From the “Introduction - "Detroit's Own" Polar Bear Memorial Association - Grobbel”) This website is the work of Mike Grobbel, and it is one of the best websites for Polar Bear research that I have seen.

i.     Ceremonies and events of the association

ii.     HonorRoll: lists the casualties and cause of death of the soldiers

v.     Polar Bear Stories: soldier stories told by the soldier themself or a family member, many include photographs.

vii.    PhotoAlbum: 241 photographs from the collection of Casimer “Cash” Nowak, Co. B. 310th Engineers. Courtesy of his son, Roy Nowak.

viii.    More links: many, many links to explore

F  Fold 3 ($): Fold 3 has records of the Polar Bears. Search by soldier's name, battle name, place, etc. Michigan residents can get online access to Fold 3 with a Library of Michigan card.

Books about the Polar Bear Expedition 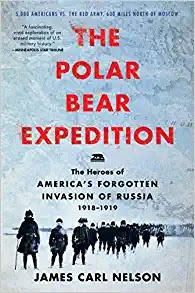 There are many books available to learn more about the Polar Bear Expedition and I urge you to go to the Detroit's own Polar Bear Memorial Association website.

One book that is fully downloadable and available free from Guttenberg.org is The History of the American Expedition Fighting theBolsheviki, Campaigning in North Russia, 1918-1919. 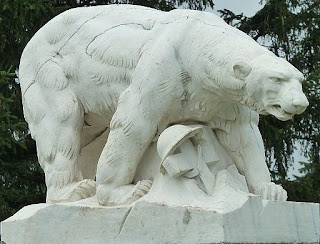 White Chapel Cemetery in Troy, Michigan is the site of the Polar Bear Memorial. It is the resting place of 56 soldiers who were brought home from Russia by a group of Polar Bear members. It was created in 1930.

I have highlighted just a few of the hundreds of resources available for those researching their Polar Bear Expedition ancestors. You will notice a definite Michigan slant because most of the soldiers were from Michigan. Do you have a Polar Bear ancestor? Check out the above resources to find him. Feel free to leave your ancestors information in the comments.

Posted by Brenda Leyndyke at 8:10 AM