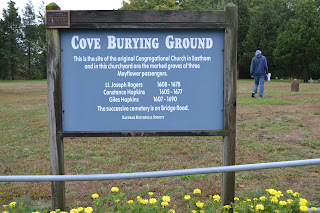 My husband and I took a long trip to New England a few years ago and we spent quite a bit of time in cemeteries. There is nothing like the grave marker carvings that we found in New England. Cove Burying Ground in Eastham, Massachusetts had some of the best carvings that we saw.

Cove Burying Ground is one of the oldest cemeteries on Cape Cod. It is the burying place of three Pilgrims: Constance Hopkins Snow, Joseph Rogers and Giles Hopkins. 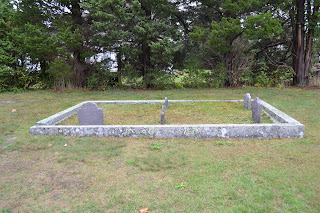 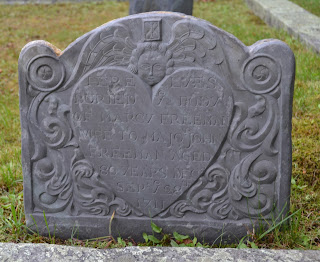 Marcy Pence Freeman
1631-1711
Inscription inside of Heart
HERE LYES
BURIED Ye BODY
OF MARCY FREEMAN
WIFE TO MAJOR JOHN
FREEMAN AGED
80 YEARS DEC'D
SEPT Ye 28th
1711
Marcy's head stone has a winged head with an hourglass over it, meaning time flies. It is the oldest winged head carving on Cape Cod. I find the intricacy of the carving fascinating, especially since Marcy was buried in 1711. The carver is unknown.
Posted by Brenda Leyndyke at 9:01 PM