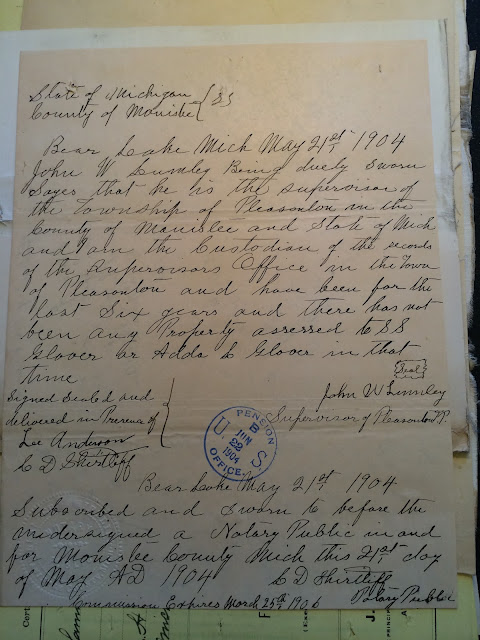 Glover, Samuel Stillman; Pension File No. 28715, Civil War Pension File, (Washington, D.C.: U.S. National Archives and Records Administration) John W. Lumley Affidavit
State of Michigan
County of Manistee
Bear Lake Mich May 21st 1904
John W Lumley Being duely sworn
sayes that he is the supervisor of
the Township of Pleasonton in the
County of Manistee and State of Mich
and I am the Custodian of the records
of the Supervisors Office in the Town
of Pleasonton and have been for the
last Six years and there has not
been any Property assessed to SS
Glover or Adda L Glover in that
time                                          Seal
Signed Sealed and             John W Lumley
delivered in Presence of    Supervisor of Pleasonton TP
Lee Anderson
C D Shirtliff
Bear Lake May 21st 1904
Subscribed and sworn to before the
undersigned a Notary Public in and
for Manistee County Mich this 21st day
of May AD 1904              CD Shirtliff
Commission Expires March 25th 1906    Notary Public
The above transcribed affidavit of John W. Lumley was found in the Civil War Pension Records of S.S. Glover, Jr. This affidavit is one of thirteen in the file.
John W. Lumley was the Supervisor of Pleasanton Township, Manistee County, Michigan.  Lumley states that no property was assessed to S.S. Glover or Adda L. Glover in the last six years.
Affidavits provide interesting information of the soldier and the time after the civil war when he was applying for his pension.
Posted by Brenda Leyndyke at 8:10 AM