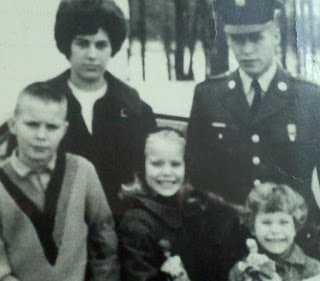 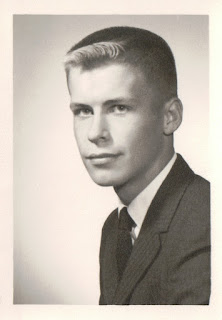 It is hard enough when a family member dies, but when it is one in your own generation, it is harder. Over the past few years, I have lost a number of first cousins.

One first cousin, Robert "Hook" "Bobby" Fredricks, son of Otto Robert Fredricks and Faye Nelson Fredricks died on May 7, 2019 at the age of 73.

As you can read, Bobby made the most of the time between the dash.

You can find his obituary and a video remembrance at Terwilliger Funeral Home's  website. 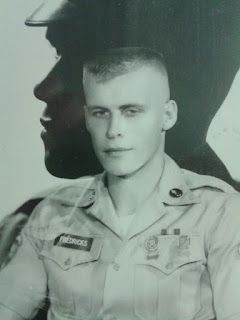 Robert “Hook” Louis Fredricks, 73, of Manistee, passed away peacefully Tuesday, May 7, 2019, with his family by his side, at The Villas in Traverse City, after a 10-year battle with Chronic Lymphocytic Leukemia (CLL).  He was born April 22, 1946, in Manistee, the son of Otto Robert Fredricks and Faye (Nelson) Fredricks.

Bob attended Brethren High School and graduated in 1964 as Class President.  After graduation, he served in the United States Army.  He completed a tour of duty of Vietnam and was awarded the Silver Star, the military’s third highest decoration for valor in combat.

Following his honorable discharge, Bob transitioned to civilian life and returned to Manistee County where he found work at Drop Forge in Manistee.  During his tenure, an incident involving a hydraulic press removed four of his fingers on his left hand, giving him the nickname “Hook.”  Forging ahead, Bob recovered and took on a Supervisor position at Mak-Kraft, in Kaleva, remaining there until the plant closed in the late 1970s.

Bob was an entrepreneur.  In Kaleva, he ventured into the petroleum business, operating a Phillips 66 full-service gas station that later evolved into a gas station and restaurant. For over 25 years, Bob owned and operated Third Coast Screen Print Company on River Street in Manistee.  This longtime Manistee business catered to fulfilling local screen printing apparel needs; it also served as a collectibles store, specializing in baseball cards.  A sports aficionado, Bob took joy in keeping area kids (And adults!) busy and entertained, cultivating many lasting relationships centered around buying, selling, and even bartering for rare and desirable baseball, football, and basketball cards.  While his own card collection was something to behold, what brought him the greatest joy was watching his regulars complete their full sets or secure their favorite player’s card.

Bob was passionate about drag racing, a pass-time he participated in as a driver and spectator.  He raced a variety of cars at local dragstrips in the 1960s, 1970s, and 1980s.  In 1967, while serving in the Army, Bob set an AHRA (American Hot Rod Association) National Record for D/SA at Drag City Dragway, in Springfield, Illinois, during the Midwestern Divisional Championships.  In the early 1980s, Bob drove a front engine dragster at local dragstrips.  Of all the cars he ever sat behind the wheel of, his favorite remained his 1967 Chevrolet Camaro, appropriately named, “Wild Child.”    In recent years, Bob occasionally drove or had other local racers drive his latest project.  At the twilight of his career, he showcased a Chevrolet Malibu wagon that he occasionally transported on a vintage-style GMC “ramp truck.”  A fixture at his home track, Northern Michigan Dragway in Kaleva, the unique car was campaigned to pay tribute to those who had passed that influenced and helped Bob during his early years of racing.

While drag racing fulfilled Bob’s need for speed, it didn’t quite quench his thirst for competition, which is where the sport of softball came in to play.  As with drag racing, he wore many hats, taking on various roles as player, manager, and sponsor well into his mid-50s.  He enjoyed many successes over his decades-long career:  In 1979, he helped Blarney Castle of Bear Lake clinch the 1979 ASA Men’s State Championship as well as Co-ed State Championship.  1986 saw the Vegas Ranch Team winning USSSA State and National Championships.  Over the years, his business’ teams—Third Coast and Farm Club Teams—would win many local league championships and softball tournaments throughout the state of Michigan.

Aside from competing in softball, Bob was recognized by the Michigan High School Athletic Association for over 28 years of service umpiring boy’s and girl’s baseball and softball, as well as officiating basketball throughout Northern Michigan.

Bob’s faith in God carried him through the dark times in his life.  A lifelong Lutheran, he was a member of Norwalk Lutheran Church.  Bob also had a fondness for farming and bailing hay.  He was an animal lover who raised cows, horses, and chickens, and he had a soft spot for the many golden retrievers that kept him company over the years.

Funeral services will be conducted at 1:00 PM, Monday, May 13, 2019, at the Terwilliger Funeral Home, in Kaleva, with Pastor Michael Belinsky Sr. officiating.  Military honors will be conducted under the auspices of the United States Army and the Bear Creek VFW Post #6333.  Interment will follow in the Brethren Cemetery.  Visitation will be held Sunday, May 12, 2019, from 4-6 PM at the funeral home.

Memorial contributions may be made to the Bear Creek VFW Post #6333 in Kaleva.

Posted by Brenda Leyndyke at 5:02 PM