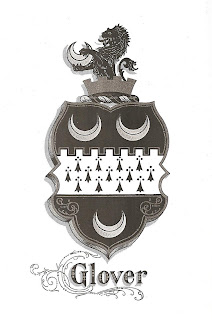 The surname Glover is an ancient name in England. It is Saxon in origin. It has been found written as Golofre, Glouver, and Glover. It has remained with this spelling, Glover, since the 14th century. The Glover Surname follows the occupation tradition of surnames; being for a glove maker. The first Glover's in the American Colonies were Charles in 1632 and Henry in 1634.
Posted by Brenda Leyndyke at 7:00 AM