A Special Take on 3 Generations

What's so special about 3 generations?  I imagine many people have 3 generation pictures.  I even have some.  My 3 generations is a little different-it is 3 generations of cancer and I am one of the generations.  I rarely think of myself as a cancer survivor, but I give thanks for surviving it every July.  I am a 30 year cancer survivor.  On July 2, 1980, I underwent surgery to remove a malignant thyroid and lymph nodes.  I was 22 years old.  Luckily, the surgery removed the cancer and I didn't need any further treatment.  I am sure modern medicine helped in my early diagnosis and treatment.  My grandmother and great grandmother weren't so fortunate.

My grandmother, Sarah Lilla (Watt)(Glover) Bell, underwent surgery of the neck area in 1965.  The cancer had spread to the point that they were unable to treat her.  They closed her up and informed the family that she probably wouldn't live long.  She died shortly after that on March 31, 1965 at the age of 80.  Her death certificate doesn't have a cause of death on it.  I don't know for a fact it was thyroid, but do know the cancer was in her neck area. 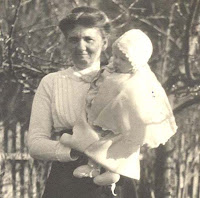 Sarah's mother, Catherine (McGee) Watt died of cancer on 22 January, 1932 in Marquette, Michigan.  Her death certificate lists the cause of death as carcinoma.  Her obituary states she had been sick for 18 months.  I do not know where her cancer was, but know that Catherine suffered from a goiter for years.


Cancer seems to run on the female side of my dad's family.  I went with my younger sister, a breast cancer survivor, to a genetic specialist.  The specialist believes we have a mutation of the P-10 gene.  The geneticist recommended further testing but due to insurance restrictions neither of us explored it further.

I can only imagine what the diagnosis of cancer did to my grandmother in 1965 and my great grandmother in 1932.  I am sure they felt it was a death sentence.  I remember, vividly, the day I was told I had cancer.  I was shocked.  It had never even crossed my mind.  Being young, I was sure I could beat it.  I did!  I had wonderful surgeons, doctors and medical personnel with the newest technology available at the time.  I am not sure what their treatment was like.

My hope and prayer is that future generations will live in a time when cancer is cured.  Wouldn't it be nice if future generations have to look up what cancer is when they see it on death certificates like I have had to look up a few obsolete conditions?  July 2nd is here and I have reminisced about being a cancer survivor and I am thankful for the wonderful care I received at Henry Ford Hospital in Detroit, Michigan.  Here's to many more years of good health for all cancer survivors!
Posted by Brenda Leyndyke at 7:00 AM