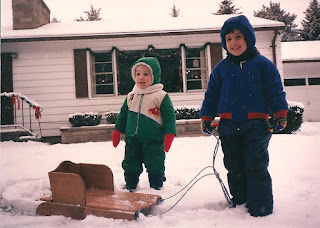 Winter 1988
Travis and Kirsten sledding in our front yard in Battle Creek, Michigan.
The darling sled was hand made by their Grandfather, Jim Leyndyke﻿
Having lived my whole life in Michigan, if it doesn't snow at Christmas it just doesn't feel right.  I love snow as long as I don't have to drive long distance in it.  There is nothing like the first snow of the season.

Snow brings the opportunity to go sledding.  As a child, my friends and I would drag our sleds to the golf course and go down the hills there.  If we weren't sledding we would be skating.  The city tennis courts would be flooded with water and frozen into a nice skating rink.  One half was for skaters and the other half was for hockey.  Sometimes we would skate on Lake Huron, after it froze over.  (Just don't tell my mother)  I remember my first time on a toboggan.  We were visiting friends and we went tobogganing on what I remember as one gigantic hill!  There were 4 of us on this toboggan and off we go.  We were in a wooded area and it seems the trees were really close.  I remember being scared, but thought it was great fun.  The worst part was getting back up the hill.

When my children were young, we would take them sledding also.  We started out around our yard, and progressed to the elementary school's small hill.  Sometimes we would take them to Riverside Country Club and when they were much older, the steep hill at Leila Arboretum, all in Battle Creek.  Travis remembers snow and Christmas like this:

"Having moved away from Michigan one thing I have realized that I took for granted was the change in seasons. As it's often joked about in my beloved home state of Michigan is that we only have 2 seasons, Construction and Winter, this is certainly not the case. As much as I dislike the cold and snow it certainly has a direct relationship with Christmas for me.
All of my Holiday memories involved snow or staying inside avoiding snow. Some of my favorite childhood activities involved playing outside. I always cherished our trips sledding with my sister and parents, whether it was walking up to our local elementary or on special occasions we would go to the big hills at the local country club. Even better than the sledding was coming inside and laying on the heat vents to warm up while mom made hot chocolate for us."

We have spent a couple of Christmas' in warmer climate without snow and it just doesn't feel like Christmas without snow.  The crunch of the snow under your feet as you walk over snow covered pathways and through glistening trees is truly magical.  So, Let it Snow!
Posted by Brenda Leyndyke at 7:00 AM