Week 15-Sports:  Did you have a favorite sports team as a child?  If so, which one and why?  Did your parents follow the same teams?  Do you still support the same team?﻿

The Detroit Tigers were my favorite baseball team growing up.  I use to watch the games on television and even had a few favorite players.  Mickey Lolitch, Denny McLain, Mickey Stanley, Jim Northrup, Bill Freehan, Willie Horton, and Norm Cash were the Tiger players of my youth.  Nothing was more exciting than when they beat the St. Louis Cardinals and won the World Series in 1968.
If I couldn't watch the Tigers on television, then I listened to Ernie Harwell calling the game on the radio.  My dad was a big Detroit Tiger fan.  He grew up in the Detroit area and enjoyed seeing them play.  My parents took my sister and I to Tiger Stadium a few times in our youth and that was exciting to see my favorite team play. 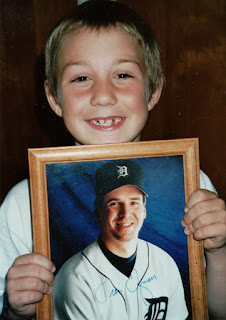 Summer 1995, Travis-age 8
Throughout the years I have followed the Tigers.  My son, Travis, is a huge Tiger fan.  He even went to Tiger Day and participated in the activities there.  He loved Travis Fryman, and we took him to see him at a card show once.  We went to a couple of Tiger games when he was younger, too.  My Travis, is living in Florida now and even went to a spring training game a couple of weeks ago.  Travis is a sport fan big time, and even majored in Sports Management in college.
I still like to root for the Tigers, but I don't watch them as much anymore.  I enjoy college football and professional hockey.  I guess, I like to support my son, who works for Florida Gators and son-in-law, Chase, who works for the Chicago Blackhawks.  I will always remember summer and baseball and the 1968 World Series Champions, though.
Posted by Brenda Leyndyke at 10:00 AM