My paternal, great grandmother, Hattie Fenn Glover, kept many things in her Bible.  Pictures, telegrams, her marriage certificate, letters, and miscellaneous newspaper clippings were saved within the page of her Bible.  I look with wonder at the various items that she felt deserved a safe place within the pages of her Bible.  I feel thankful that the Bible was kept in good condition and found its way to me. 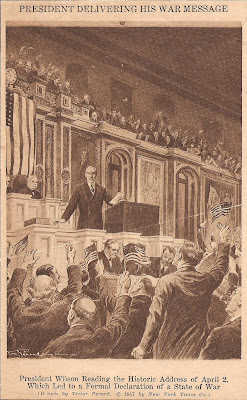 One of the newspaper clippings she saved was a picture of President Woodrow Wilson reading the declaration which led to the United States entry into World War I, in 1917. 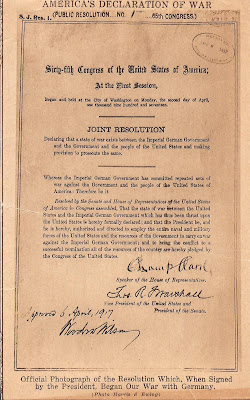 The back side of the picture had the official photograph of the declaration, which President Wilson signed 94 years ago today, 6 April 1917.

I wonder what prompted her to cut out and save this clipping.  Was it because this was the first major war she would remember in her life, or did her husband, Frank H. Glover, save it because his father was a civil war veteran?  Whatever her reason was for including this, I am sure, she wasn't anticipating that 20 months after this, her 15 year old son, Merle, would runaway to Canada and enlist to fight in the war.  I imagine her heartbreak when this happened.  Whatever the reason for saving it, it must have meant something to her and I am happy to have it.
Posted by Brenda Leyndyke at 6:00 AM