Selling Groceries and Feed in 1883: Those Places Thursday 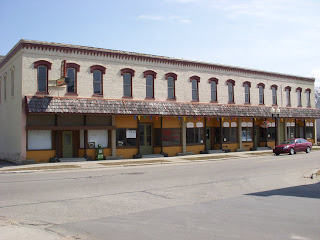 My great uncle, August Guhse, owned a grocery and feed store at 147-149 Washington Street in Manistee, Michigan. (the left end of the building seen above)  He started his business in 1883 at this location.  August Guhse started his career as a clerk for Henry Mau at a store on River Street, in Manistee.  Next, he worked for Joseph Baur on River Street.  In 1883, August Guhse and Joseph Baur became partners at the Washington Street building, under the firm name of Baur and Guhse.  When Joseph Baur died, August Guhse became sole proprietor.  The store carried a complete line of groceries and provisions, hay, flour and feed.