J. August Fredrick is my maternal great grandfather who immigrated to the United States around 1871.  No one knows a lot about his family and he has been a source of frustration for me.  Since I wasn't getting anywhere with him, I decided to research his sisters.  I knew he had three sisters who came to the United States because they were listed in his obituary.  I was hoping to find information that would lead me to what part of Prussia J. August was from.  I found a little more than I thought I would! 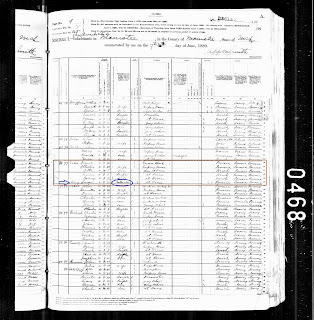 I hit a genealogical jackpot when I searched the 1880 Manistee, Michigan census for the Guske family.  I found the August Guhse family (August, Ottilie, Otto, Emma and Mary) listed.  In addition, there was a mother-in-law, Susan King, listed.  A mother-in-law, I did a double take!  Had I found my great great grandmother?  I was cautious as I had seen mother-in-law listed before on a Glover census record and it wasn't true, but I was excited anyway. 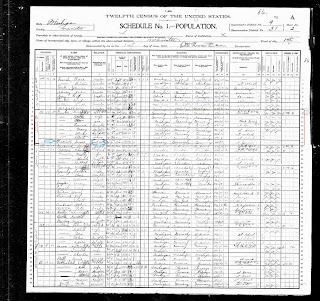 No one in the family is going to believe that J. August Fredrick's mother was living in Manistee, Michigan.  They don't think she came to the United States, let alone immigrated here.  I figured if I was going to convince them I better do a little more digging.

The next document I found was a passenger list for Susanna Fredrich, Amelia Fredrich, and Otelia Fredrich.  They traveled from the port of Liverpool, England; Londenderry, Ireland to Quebec arriving 21 October 1872.  Manistee, Michigan was listed as their destination to which ticketed.

Michigan Deaths and Burials, 1800-1995 at familysearch.org has a record of Susana Fredrick's death.  She died 4 Nov 1906 in Manistee, Michigan.  Her father's name is listed as King.  So, I believe when the 1880 Census was taken she was listed as Susan King for some reason.  She did not read, write or speak English and this may have contributed to the information listed. 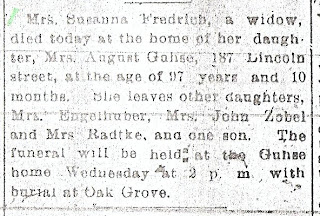 The last piece of information I have discovered, so far, is a short obituary from the Manistee Daily News stating she died at the home of her daughter, Mrs. August Guhse.  The paper lists her survivors as daughters, Mrs. Engelhuber, Mrs. John Zobel, Mrs. Radtke, and one son.  The one son is J. August Fredrick, I wonder why he wasn't listed by name.  He lived about 20 miles from Manistee in Brethren, Michigan.  Mrs. Radtke was actually her oldest granddaughter, Albertina Zobel.

I think this shows the importance of researching brothers and sisters of your ancestors.  I never thought I would find my great, great grandmother in a United States census, but I did.  I was just looking for more information in the 'hopes' it would lead me to new records.  I ended up with a new ancestor instead.  I now have more records to search (naturalization records).  Plus, I have news to share with the family.
Posted by Brenda Leyndyke at 6:00 AM